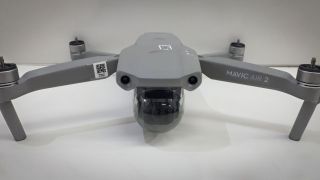 Images and specifications for the DJI Mavic Air 2 have been leaked by a Brazilian certification authority, revealing a drone with a 48-megapixel camera capable of capturing 4K video at up to 60 frames per second.

While a handful of far more obfuscated images of the DJI Mavic Air 2 had been leaked previously, these images by Brazil's ANATEL (the nation's equivalent of the FCC) give a pristine view of the drone, along with key specifications (thanks to DroneDJ for the find).

According to the leaked Portuguese documentation (via machine translation), the specs suggest that the Air 2 will be one of the very best camera drones:

Notably, the range of the controller has been significantly increased. "Integrated with the remote control, DJI’s Ocusync 2.0 long-range transmission technology offers a maximum transmission range of 8km and sends the videos captured by the aircraft to DJI Fly on your mobile device up to 1080p."

In addition, the website points out that 3500Ah, 11.5V Lipo battery yields over 40WH of capacity.

While the lion's share of the specifications are now known, we won't have long to wait until we learn about details such as pricing and availability. DJI has teased an event on 27 April, which is expected to be the reveal of the Mavic Air 2. We'll bring you news from the announcement as it happens!