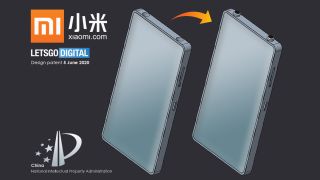 Camera phone tech currently seems to be at the forefront of technological innovation, with exciting new patents appearing thick and fast. Whether it's folding phones, 108MP camera phones or pop-up cameras, it seems that there's plenty of revolutionary new tech to sink our teeth into. The latest patent to appear is from Xiaomi – and it depicts an iPhone-like camera phone with what appears to be a pop-up 360º camera.

While an interesting patent doesn't necessarily mean that the camera phone it's depicting will hit the market, it is a useful indicator of where the manufacturer's attention is placed. While Apple used to be the great innovator of the camera phone field, it's now falling to smaller, often-Chinese, companies to push the boundaries of technology further.

Tech website Let's Go Digital recently reported on the aforementioned interesting Xiaomi patent, which depicts a camera phone with a borderless screen that's devoid of a notch or punch-hole selfie camera. The top of this Xiaomi camera phone has two circles, which the patent depicts as being able to come out of the housing as some kind of pop-up system.

While the summary patent description doesn't describe what these circles are specifically for, Let's Go Digital posits that it could be some kind of camera system – possibly even a 360º camera. While this might initially seem like a bit of a stretch, the fact that there isn't a front-facing camera (which is almost a requirement for camera phones at this point) points to Xiaomi having found a new solution to erase the need for a punch-hole/ notch selfie camera.

It's possible that this patent could point towards an under-screen camera, as Xiaomi has already announced that it's developing a phone with this technology. However, as Let's Go Digital points out, this still leaves the two pop-up circles on the top of the phone shrouded in mystery.