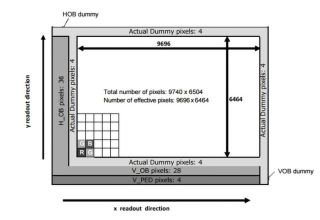 A data sheet detailing a new full-frame Canon sensor, boasting 65 megapixels and Dual Pixel AF, has leaked online – and speculation is running rampant about what it is and what it means for the company's upcoming cameras.

The Canon EOS R family, in particular, has been a point of focus for the pundits. With persistent rumblings that the Canon EOS R successor will be a high resolution model, said to be in the region of 70MP, it's easy to conclude that this 63MP chip will be the one that finds its way into the new camera.

However, a number of factors suggest that this sensor isn't up to spec for the next EOS R – and, in fact, may not be for a commercially released camera at all. (And, as with any leak, it should also be remembered that it may not ever see any form of release – and may not even be true – until officially confirmed by the manufacturer itself.)

In its analysis of the leaked document and specs, Canon News focuses on four key factors that point to this sensor not being a logical fit for the rumored hi-res Canon EOS R.

Not a commercial sensor?

Finally, rolling shutter would be an enormous issue with this sensor. "… with a 188ms sensor read time (in the 'speed mode' no less), it will be at least twice as bad as the EOS R in full sensor readout electronic shutter."

All in all, this document appears to describe a sensor designed for non-commercial release – such as Canon's sensors for industrial, machine vision and scientific applications. Of those, neither the 120MXS or 3U5MGXS were used in a Canon camera, while the 35MMFHDXS_A powers the video-oriented Canon ME20F-SH Multi-Purpose Camera.

Given some of the stunted specs, Canon News even suggests that this could be an older Data Sheet for an unreleased or since-scrapped sensor. Either way, it seems unlikely that it has any relation to the purported 70MP EOS R successor.

New Canon EOS R due in 2019 with 70MP sensor, IBIS, dual card slots
Plenty of Canon EOS R rumblings among the best camera rumors
Find out which is the best Canon camera