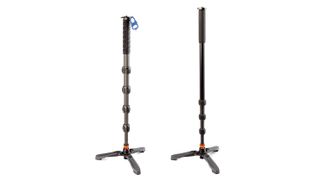 British tripod company 3 Legged Thing has announced that it will shortly be making two new monopods and a foot stabiliser available.

The three new products are said to "straddle the divide between photo and video, without compromise, and at a price point that makes them hugely competitive." Even the best monopods still need you to hold on to them, but this one comes with an optional three-legged foot stabiliser to make it free-standing.

Continuing the company's tradition of christening its models with men's names, the new Alan monopod is a rugged carbon fibre monopod designed for professionals, while the Trent model is described as an ultra-tall Punks monopod. An additional Docz stabiliser is to be made available separately.

The Alan model, named in honour of Alan Turing, is targeted towards sports and action photographers, as well as videographers. It has a height of 45mm when contracted and a maximum height of 1.49m when extended.

Crafted with eight layers of carbon fibre and aircraft-grade alloys, Alan is capable of supporting up to 60kg of kit. Furthermore, the addition of 1/4”-20 and 3/8”-16 threads at both ends ensures that the new model can work with accessories or used as a microphone boom.

The Trent model, meanwhile, named after Nine Inch Nails frontman Trent Reznor, can be extended to over 2m high, which, the company claims, qualifies it as one of the tallest monopods around today. It offers a 30kg payload and is designed with Bubble Grip technology on the leg locks and column grip for improved leverage and maximum grip in poor weather.

As with its sibling, Trent features a rubber boot that can be exchanged for another accessory, such as a Heelz or Claws, although both will fit into the new Docz stabiliser too.

3 Legged Thing has designed Docz with a 30cm alloy base and a robust ABS top cover, with control over the friction and tension settings on ball mount for fluid motion when shooting action.

All three models will be available on their own and in kit configurations.

The three models and their kit configurations are available to pre-order now on the 3 Legged Thing website and via retailers, although their official release date isn't until the start of August. Pricing for other territories has not yet been made available.