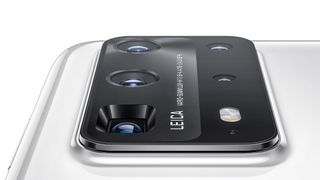 Huawei has already impressed us with the P40 Pro, if only for its phenomenal camera performance (read our full review here), but the story doesn't stop there. Seeking to push camera phone performance to the bleeding edge, we're about to be treated to a P40 phone that's even more advanced than the Pro.

However, you will at least get a whole lot of camera tech for your money...

It's also unusually large for a camera phone sensor at 1/1.28-inches, which means equally big 2.44 μm pixels. Huawei is keen to draw attention to this making the sensor 200% more light-sensitive than the 1/2.55-inch primary camera sensor in the iPhone 11 Pro Max. In fairness to Huawei, this difference in sensor size is indeed big - the P40 Pro Plus' sensor is much closer in size to a 1" sensor - used not so long ago by interchangeable lens cameras like Nikon's 1 series - than a typical 1/2.33-inch phone camera sensor.

When shooting in High-Res mode, images are captured using the full 50MP resolution, equating to an 8192 x 6144-pixel image. However, as standard, images employ pixel-binning (as with all 48MP phones launched over the last year) and are captured at 4096 x 3072 – roughly 12.5MP.

In most camera phones, the specs of the ultrawide camera pale in comparison to those of the primary camera module, but not in the P40 Pro Plus. Again, it's the same ultrawide camera as in the P40 Pro, but that's no bad thing, as it means it’s the same stunning Super Sensing sensor introduced on the Huawei Mate 30 Pro. It features a 40MP resolution combined with an 18mm-equivalent focal length and a large-aperture f/1.8 lens.

Here's where the P40 Pro Plus differs most from the regular P40 Pro. Where the latter follows on from the P30 Pro with a 125mm-equivalent periscope telephoto camera that provides 5x optical zoom, the P40 Pro Plus doubles this to 10x optical zoom from its 240mm-equivalent periscope camera. If you're wondering what a periscope camera is, it's Huawei's rather nifty way of fitting a long lens into a slim phone. Light enters the camera in the usual direction but is immediately reflected through 90 degrees, where it then travels down the phone body through various lens elements before being reflected back through 90 degrees again to hit the image sensor - the light path being just like in a typical periscope.

With such a huge gap between the 23mm wide angle camera and 240mm 10x telephoto camera, a secondary, intermediate 80mm telephoto camera is included in the P40 Pro Plus, providing 3x optical zoom to ensure top notch image quality right through the entire optical zoom range.

The fifth and final camera in the P40 Pro Plus is also shared with the P40 Pro. It's a depth-sensing time of flight camera that's able to judge where your subject is against its background to apply fake background bokeh blur more effectively and realistically.

A pair of front-facing selfie cameras peek through a relatively conspicuous punch-hole in the display. They consist of a 32MP 26mm-equivalent 1/2.8-inch primary camera, assisted in depth-sensing by a time-of flight camera to give you the same shallow depth of field effects for sexy selfies as you get from the rear-facing cameras.

The screen is also designed to wow with its Quad-Curve Overflow Display. Where many phone screens curve into the bezels at either side, the P40 Pro Plus's screen also curves away at the top and bottom of the phone. Huawei reckons the screen is "inspired by the beauty and form of flowing water" and will "dissolve the barriers of vision and imagination". Clearly a significant chunk of what you'll pay for a P40 Pro Plus is going straight to Huawei's marketing department!

At 158.2 x 72.6 x 9mm, the P40 Pro Plus is an identical size to the P40 Pro, though slightly heavier at 226g. That also makes it a fraction heavier than the Galaxy S20 Ultra 5G, even though the latter is a noticeably bigger phone thanks to its 6.9-inch display.

Where the P40 Pro gets five chassis colour options, the Pro Plus has just two: White Ceramic, and Black Ceramic. This Nano-tech ceramic surface has been formulated to be polished smooth while also very tough and scratch-resistant. The P40 Pro Plus is also IP68-rated dust and water resistant, so it should be able to dive down to 1.5m underwater for up to 30 minutes without issue.

Two capacity options are available: 256GB, and 512GB. Only the P40 Pro gets an entry-level 128GB option, though all versions have expandable storage courtesy of Huawei's proprietary Nano Memory card slot. Nano Memory cards are the same size as a Nano SIM card and function identically to MicroSD, but are 45% smaller in physical size.

The elephant in the room...

While it may be possible to hack your way around this by side-loading these apps yourself with a bit of know-how, even then app performance and stability isn't guaranteed, so any prospective buyers really need to consider the P40 Pro Plus (and all P40-series phones) to be incompatible with core Google apps.

Huawei's answer to this is its own App Gallery, which does still include many widely-known apps and alternatives to Google's big-name apps, but other iconic apps are still missing - Facebook, Instagram and WhatsApp being the biggest.

The Huawei P40 Pro Plus looks set to be all the camera phone you could ever want, yet probably still won't want to buy. This is Huawei at the very top of its camera phone game, pushing the boundaries of what's possible with a phone camera, both in terms of optical hardware and advanced AI software processing. The rest of the phone's hardware is also top grade, and the premium display and chassis design also stand strong against other 2020 flagship phones. But despite all these positives, the glaring negative is that lack of Google app compatibility. Though Huawei is fighting hard to compensate with its own app store, most Android users will be pained to part with their beloved Google apps, and as such will look elsewhere to the likes of Samsung, OnePlus and Google's own Pixel for a high-end camera phone.