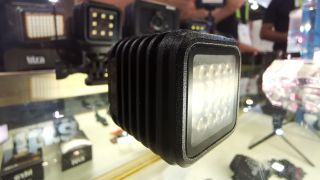 With cameras that reach a whopping 11K, ultrawide monitors, underwater drones and even a new curved camera sensor, Las Vegas is awash with camera tech of all kinds.

The annual CES tech convention is not known as a photography show, but already there have been a couple of significant announcements from the big brands. Most notable have been Panasonic’s teasing of more details about its Lumix S1R and S1 full-frame mirrorless cameras, and Nikon’s launch of an ultra-wide zoom lens for the Z6 and Z7.

However, the vast halls of CES are also home to some intriguing innovations from across the globe.

Why not film everything in ultra-high resolution, and edit it down to a phone-size video later? That's the thinking behind the Insta360 Titan, a $15,000 (£12,000) 360-degree camera with eight lenses unveiled at CES.

Capable of being controlled from a smartphone and featuring FlowState Stabilization technology to get rid of shaky-hand syndrome, Titan's eight lens camera system-in-a-ball achieves not HD or 4K resolution, but 11K.

Yes, it's mega-expensive for now, but at the rate tech trickles down at Insta360, this meant-for-movie-directors tech due to go on sale in April is worth keeping an eye on.

Screen real estate this expansive is getting harder to resist. Perfect for photo-editing, but even better if you're stitching together photos to make panoramic images, this gently curved 49-inch ultrawide monitor that has a 32:9 aspect ratio.

Just as impressively, the 49WL95 also allows you to hook-up two sources and view photos side-by-side, and has a plethora of USB-C and HDMI ins and outs.

Are you packing over 2000 lumens in your camera bag? This tiny 90g rugged LED flash from Litra has a four-hour battery life and offers four levels of flicker-free, ultra-wide angle light; 100, 450, 800, and 2200 lumens, all at a daylight colour temperature of 5,700k.

With a tagline of 'studio lighting in your pocket', it's aimed at professional photographers and videographers heading outdoors; it's waterproof to 60 feet/20 m, as well as being drop proof, dust-proof and freeze proof.

It even attaches to belts, bike handlebars and helmets for secondary uses as a torch. It costs $80/£63.

It can also live-stream online. Designed to explore parts of the ocean that are difficult for divers to reach, its navigation is controlled via smartphone or tablet, it can pan left and right, and tilt up and down 45° in any direction.

It ships with a a 165ft tether (though that can be upgraded), and a custom-made backpack.

How steady is your hand? Able to take any brand of DSLR is this professional-grade stabiliser aimed at filmmakers who need to keep things smooth.

There's a handy smartphone support that's useful for cameras offering a live feed via an app, but what's really appealing about the Crane 3 Lab is a synchronous zoom and focus system.

A hardware control system for lenses that can be operated using rockers on the joystick, as well as via a phone app, the Crane 3 Lab features aviation-grade motors for super-smoothness.

This updated version is compatible with all popular DSLR cameras, and hundreds of big brand and third party lenses.

It may be a brand that's of less of interest to most photographers, but Kodak continues to issue some novel products that embrace instant-print cameras and mobile printers with nostalgic designs.

If you're off on a shoot with a laptop, always take portable hard drive to back-up your photos. Solid state drives is increasingly the way to go if you want this post-shoot task done super-quick, as demonstrated by Seagate's new LaCie Mobile SSD, which goes on sale exclusively through the Apple Store this week.

There's an obvious reason for that. Dishing-out file transfer speeds of up to 540MB/s and with capacities up to 2TB, its diamond-cut design is meant to match the aesthetics of Apple MacBooks.

Less a product and more a breakthrough component that could change how cameras work is Pixcurve. An image sensor that's curved specifically to replicate the human retina, its makers claim that Pixcurve reduces the number of lens elements in digital cameras' optical systems.

That, of course, means cameras can be both smaller and lighter. The brainchild of French research institute CEA-Leti, it's claimed that Pixcurve compensates for optical aberrations, achieves a sharper focus across the field of view, and enables a 60% reduction in lens size.

Its makers are touting it for use in high-end cameras, smartphones, action cameras and virtual reality headsets.

Whether you're into panoramic photos, time-lapses or 360°, there's no denying the appeal of a good auto-tracker for a smartphone. There have been a few around over the years, but there's something intriguing about this one from Pivo.

Described as an 'interactive smart pod', Pivo takes a phone and swivels it slowly for panoramas and motion timelapses, but it also offers creative 360° effects like tiny planet and inverted tiny planet, and 'ManyMe’, a novelty selfie mode that overlays multiple images of y. There's even a GoPro mount add-on.

Camcorders are dead, right? Perhaps to the mainstream, but that hasn’t stopped Sharp pulling out all the stops and unveiling the Sharp 8K ‘video camera’. That won’t be its real name at launch but that’s exactly what they are calling it at the moment.

We were expecting Sony to come up with an 8K camera or camcorder of sorts, but it’s Sharp that got in there first, and at CES that’s all that matters, and it looks like its device will be a Blackmagic Pocket Cinema Camera 4K rival.