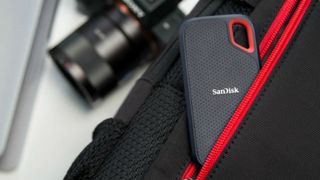 If all your shooting is fast filling your computer’s storage – or you need to keep your digital portfolio portable – then it might be time to invest in portable storage. A conventional portable hard disk drive still offers the most bytes for your buck, but for top transfer speeds, a solid state drive - SSD - is a must. The best portable SSDs are also a fraction of the size and weight of a conventional portable hard drive, and though an SSD's speed and portability still commands a premium over a hard drive, pricing is now much more accessible for storage space up to 1 terabyte.

Rather than testing transfer speeds using unrealistic benchmarking software, we instead recorded maximum sustained read and write rates when shifting photos and video to and from a Windows 10 PC packing a fast internal m.2 SSD and USB 3.1 Gen 2 connectivity to ensure no testing bottlenecks.

Five things to look for in a portable SSD

Conventional hard disk drives use sensitive moving parts, but not SSDs, making them much less vulnerable to drops.

Some drives are pre-configured for either Mac or Windows. This can almost always be changed with the right software.

Don’t expect even an SSD to transfer a large batch of image files as fast as it’ll shift a single video file of the same size.

All portable SSDs are powered by their USB connection, so don’t require a separate power brick.

The fastest portable SSD we've ever tested, plus it's water-resistant!

Sandisk already produces the Extreme Portable SSD, and this Pro version looks almost identical with its rugged rubberized exterior that boasts IP55 water and dust resistance, along with shock protection. But underneath the uninspiring exterior, the Extreme Pro is a very different beast from any previous version when it comes to performance. Sansdisk claims up to 1050MB/s maximum continuous read speed, compared to 'just' 550MB/s for the non-Pro drive - quite a boost.

As with a lot of marketing claims, however, you may well struggle to match the numbers on the box. Despite testing with a blazing fast laptop, we could ‘only’ manage a peak 645MB/s when reading a large video file (a best-case scenario) and 554MB/s when writing it to the drive. Still, that’s hugely fast, and image transfer speeds of 518/509MB/s read/write are equally incredible.

Capacities come in 500GB, 1TB and 2TB, with the notable absence of an entry-level 250GB version. The 500GB option makes most sense unless you definitely need more space, as prices pretty much double in line with capacity.

Premium performance and an ultra-tough build

Until recently this drive was known as the G-DRIVE Mobile SSD R-Series, and may still be called this at some retailers. Its standout feature is its ruggedized design that protects the drive against a 3-metre drop and 1000lb of crushing force, plus the exterior is IP67 rated to resist dust and moisture. Despite this extra exterior protection, the drive's 95mm x 50mm x 14.5mm dimensions are only marginally more bulky than the non-ruggedized WD My Passport SSD.

Inside the toughened shell is a fast SSD which G-Technology claims can transfer data at up to 560MB/s - impressive stuff. The drive connects via an up-to-date USB 3.1 Gen 2 Type-C connection, though a Type-A converter is included to maintain compatibility with older computers.

Though we couldn't quite match the drive's claimed 560MB/s max transfer speed, we did clock it at a very respectable 410/353MB/s when reading/writing video. Image transfer speeds of 307/298MB/s read/write are also hugely impressive. Factor the five-year warranty and this drive has every base covered.

Supreme speed in a svelte package, and it's reasonably priced

Samsung's entry is as sleek as portable SSDs come, with a simple matte aluminium casing that oozes understated quality. Measuring only 74 x 57.3 x 10.5mm, it easily slips into a shirt pocket, and there are even four colour finishes: black, blue, gold and red. You might not guess it from the stylish exterior, but the SSD T5 is also rated to survive a 2-metre drop, and your data can be protected by 256-bit hardware encryption. 500GB, 1TB and 2TB capacity options are available, with the 1TB version being particularly good value, costing little more than many rival 500GB drives.

Hook up the USB 3.1 Gen 2 connection (Type-C and Type-A cables are supplied) and, while the advertised 540MB/s transfer speed will be tough to achieve, you're still assured stellar speeds. We recorded blistering 415/365MB/s rear/write speeds when transferring video, and image read/write speeds of 308/298MB/s are equally mighty.

A super-slim SSD and very good value per gigabyte

If you're after a seriously slim SSD, this offering from Transcend is just the ticket. Measuring a mere 7.5mm thick, it's appreciably thinner than a typical portable SSD, and though longer than most at 120mm, it's only 33.6mm wide. The matte aluminum outer casing also looks the part, with its space-grey finish especially complementing Apple products.

With the aid of Transcend's bundled Elite software, the drive can be formatted for Windows or Mac, or you can connect it directly to an Android mobile device that supports USB On-The-Go. USB Type-C to Type-C, along with a Type-C to Type A cable are included to allow connection to desktop, laptop or phone.

The drive utilises a modern USB 3.1 Gen 2 interface. Its 10 Gbit/s speed rating is easily enough to max out the drive's claimed 520MB/s max read and 460MB/s max write rates. When it comes to capacity, you can have any size you want, as long as it's 960GB. However despite there being no smaller option, pricing is very competitive, in line with most manufacturers 500GB SSDs.

The My Passport SSD is certainly one of the more stylish portable SSD's on the market, with its part metal-effect casing and svelte 90 x 45 x 10mm size also making this one of the smaller portable SSDs you can buy. It's available in 256GB, 512GB, 1TB and 2TB capacities, with the 512GB version currently being the price/capacity sweet spot at £80. The USB 3.1 Gen 2 Type-C connection ensures fast transfer speeds, and for computers that lack a Type-C port, WD includes a Type-C to Type-A adapter in the box.

Performance is overall very good, but not quite up there with the best. We clocked the My Passport SSD at a very healthy 392MB/s when reading a single large video file, though a 201MB/s video write rate is much more pedestrian. Likewise, 234MB/s read and 198MB/s write speeds when transferring multiple image files, while perfectly adequate, is nothing special.

The SanDisk Extreme Portable SSD is another ultra-compact SSD. It’s longer than the Samsung T5, but is even narrower and incredibly thin – and has a very similar design to the faster (and more expensive) SanDisk Extreme Pro Portable SSD. The mildly ruggedized plastic shell feels solid and is IP55 rated to resist water and dust, and like the Samsung drive, it’ll withstand a 2m drop.

We observed slightly slow image read speeds – writing photos to the drive was oddly faster – but video performance is top notch and a match for the fastest SSDs here.

The SanDisk Extreme Portable SSD is pre-formatted to work with both Windows and Mac OS out of the box.

On the one hand, this is a typical - if relatively large - portable SSD available in 250GB, 500GB, 1TB and 2TB capacities. It’s capable of reasonable 350/285MB/s read/write speeds during sustained video file transfer, while folders of images shift at an equally rapid 290/256MB/s.

But this is much more than just an SSD. It’s also a device designed to be used as stand-alone storage in the field, so during a shoot you can back up images from your memory card without needing a computer. This is made possible by the Passport’s built-in SD card reader.

Once your shots are on the drive, you can then view them on your smartphone or tablet, as the Passport also acts as a wireless media server with its Wi-Fi hotspot. Even Raw images stored on the drive are viewable, and the device can wirelessly stream 4K video.

Powering all this is a built-in battery good for up to 10 hours continuous use, and if you don’t need all-day power, the battery can also double as a 6,700mAh power bank.

The only drawback with the device is its size, as at 135mm-square and 30mm thick, it's bulky by SSD standards, though you can remove the soft rubber bumper to shed a few millimeters if you can manage without its shock protection.