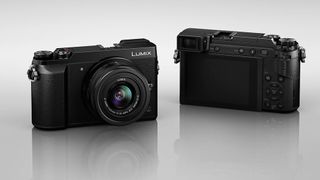 The Panasonic GX85, also known as the GX80 in some markets and even the GX7 Mark II in Japan, shares a sensor and most of its name with the Panasonic G85 (or G80) – though that’s more or less where the similarities end.

Here, it’s a case of old school meets high tech, thanks to the marriage of a retro-styled chassis with a sensor that captures 16MP stills and 4K video, with the further option to extract 8MP stills from 4K video footage.

Panasonic’s innovative Post Focus functionality also makes an appearance. This cleverly allows photographers to make a post-capture adjustment so that a different part of the scene is in focus to the one originally captured, something that's accomplished with a mere finger-tap on the camera’s LCD.

Another welcome feature on the GX85 is the fact that its touchscreen can be tilted, though unfortunately not swung outwards from the body at a 180° angle, nor flipped to face the subject for selfies, as on some notable rivals. With Panasonic's super-small 12-32mm 'pancake' zoom, the GX85 ranks as one of the best travel cameras right now.

There's also an electronic viewfinder with a high 2.76million-dot resolution for a pleasingly lifelike display; what you see is pretty much what you get. An integrated eye sensor also detects when the viewfinder is being used and deactivates the larger LCD as this happens, which also saves you from having to manually keep changing this.

As is usually the case with Panasonic cameras, the GX85 feels reassuringly weighty and solid. It also makes use of in-body image stabilisation – a welcome move by Panasonic from the perspective of convenience, and a feature that works even better when using a lens with its own image stabilisation system (the combination dubbed Dual I.S. 2).

The GX85’s autofocus system is swift and responsive, determining its subject’s sweet spot in the blink of an eye. As we’ve come to expect from Lumix models, images and videos straight from the camera are bright and rich in colour, with plenty of detail captured. Even the relatively small 12-32 mm f/3.5-5.6 G Vario ASPH. MEGA O.I.S. kit zoom lens that was provided on launch impresses, though more enthusiastic photographers will probably soon upgrade to a faster lens.

Packed with features, this powerful CSC is a strong competitor in its class