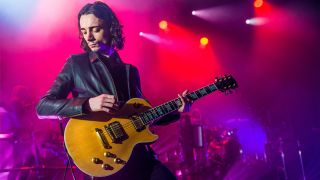 If you’re a fan of both live music and photography, then it’s only a matter of time before you’ll be tempted to combine your passions and start trying to capture your favourite artists on stage at concerts.

Whether your journey begins with a few snaps of a mate’s band in a local pub or with accreditation for a concert at a dedicated music venue or festival, the concert photography tricks and tips provided below will help you to hit the ground running.

Live music is arguably one of the most difficult photographic genres, with fast-moving subjects darting around in testing lighting conditions, but it’s also a hell of a lot of fun to capture in images that drip with energy and atmosphere.

Selecting the right gear for concert photography can make your life in the pit – that is, the space between the stage and the crowd for security and photographers – a whole lot easier.

Generally speaking, photographers are only allowed to capture images during the first three songs, and with no flash, so if you don’t have reliable equipment, your window of opportunity for stunning images can quickly disappear.

There are two main factors to consider when choosing a camera for music photography: how well it handles higher ISO settings and autofocus performance.

A camera’s ISO setting controls its sensor’s sensitivity to light, and at the higher levels often required for live music, such as ISO 1600 or ISO 3200, the image noise they produce can be strong enough to noticeably degrade image quality.

A good live music camera can handle these higher ISOs without producing an unusable amount of noise. While there are exceptions, as a rule, the larger the sensor size of a device, and the newer it is, the cleaner its performance will be.

This latter principle also tends to apply to a device's autofocus system. Here, you’ll want to try and select one that will continue to operate at light levels as low as -3EV or better.

The most popular current models with professional music photographers are full-frame options such as Canon’s EOS 5D Mark IV and EOS-1D X Mark II, as well as Nikon’s D750, D850 and D5.

When it comes to lenses, it’s all about wide apertures, and you should look for optics that provide a maximum aperture of f/2.8 or faster.

A good place to start is a 50mm f/1.8 prime lens, as this provides a very fast aperture for maximum light gathering and a good focal length for portraits and mid-length shots, and it's relatively inexpensive too.

Buying music photography gear second-hand can often make sense, as with crowd-surfers, drinks thrown, and just by moving around in the dark, all gear will inevitably pick up a few knocks and scrapes along the way anyway. In this field, it's performance that matters, rather than cosmetic perfection.

You can also give yourself an advantage by researching existing photos from a band’s tour, or past tours, before attending the show on things like Instagram and Facebook. For example, does the vocalist tend to hold the microphone in a particular hand? This may mean you want to position yourself to a certain side of them during the night for unobscured shots of their face.

Is one member of a band particularly prone to pulling funny facial expressions or leaping into the air? You’ll want to keep a close eye on them during the show for interesting captures. Or perhaps there have been pyrotechnics on other dates? Get ready to stand back a bit during the set for some exciting flame or smoke-filled shots.

Current page: Before the show