With a global RRP of US$279 , the Xiaomi-made Redmi Note 10 Pro is a head-scratcher. Its 108MP camera system is best-in-class by a wide margin, its screen sounds like something that fell off a flagship spec sheet, and with a huge battery, sleek design and enough power to deliver smooth performance, it should cost more. Ridiculous value masks many indiscretions, so while the Mi 11 was held back from excellence owing to its interface, the Redmi Note 10 Pro sits pretty at the top of the budget phone podium.

The Redmi Note 10 Pro (Pro Max in India) is made by Xiaomi. Xiaomi also makes excellent phones under the Poco name, like the Poco X3 NFC, and of course Xiaomi phones like the flagship Xiaomi Mi 11. No stranger to fantastic budget camera phones, Xiaomi hasn’t always nailed user experience, but it tends to get value very right, and its cameras are also competitive. This has never been more true than now, with the Redmi Note 10 Pro combining a 108MP main camera with a $279 price - and currently available exclusively through Aliexpress.

The head-scratchingly good value doesn’t stop there, with the Redmi Note 10 Pro’s 6.67-inch display combining AMOLED technology with a flagship 120Hz refresh rate. Add to the mix a 5020mAh battery as well as 64GB or 128GB, and we’re confused as to how any other phone hopes to compete on value.

The Redmi Note 10 Pro is a fairly large phone, combining a 6.67-inch screen size with a 193g weight — lighter than an iPhone 12 Pro Max, but heavier than the iPhone 12 Pro. Thanks to its curvy back and sides, it doesn’t feel clunky, with a comfortable fit in-hand.

Unlike most flagships, the 10 Pro is made of plastic, but it definitely doesn’t feel cheap. With a glass-a-like finish, it shimmers handsomely, and thanks to its decent weighting, doesn’t feel hollow either.

Available in four colors: Onyx Gray, Glacier Blue, Gradient Bronze, whichever you get, the Note 10 Pro is relatively hardy, with a pre-fitted screen protector, a case in the box and IP53 dust and splash resistance.

Also worth noting, there’s a headphone jack alongside the USB-C port, and stereo speakers at the top and bottom of the phone. We especially appreciate the attention to detail Xiaomi pays to the seemingly curved fingerprint scanner on the right side, which matches the frame’s curve. The stepped camera bump also looks much better than the bumps on clunky budget competition. If we had to nitpick ,the words ‘Ultra Premium’ printed across it are a bit naff, but that aside, the Note 10 Pro nails design.

As for the screen, there isn’t much to say other than wow.

At the Redmi Note 10 Pro’s price, you can usually expect either a high refresh rate of up to 120Hz with LCD technology, or a 60Hz OLED panel if you’re lucky. Xiaomi packs both into this phone, complete with 1200-nit brightness, HDR10 support and Gorilla Glass 5 protection.

Simply put, if you want the best screen money can buy for around $279, the Redmi Note 10 Pro is it at the time of publishing this review.

The flagship features continue, as the Redmi Note 10 Pro’s main camera module features a 108MP Samsung ISOCELL HM2 sensor, matched with an f/1.9 aperture 26mm lens. While the sensor has notoriously small pixels (0.7µm), using nine-pixel-binning, it creates an effective pixel-size of 2.4µm. While there’s no optical stabilization helping the lens along in low light, the camera does feature a night mode, and locks onto subjects with dual pixel PDAF.

The main camera’s the star of the show, so the 8 MP ultra-wide alongside it isn’t quite as impressive, with its lower pixel-count, f/2.2 aperture and 118˚ field of view. It also misses out on autofocus, which we’d expect at the price, though that isn’t the case for the phone’s macro camera.

Macro cameras on budget phones tend to be awful, but Xiaomi loads up the Redmi Note 10 Pro’s with the same module found on the flagship Mi 11: a 5 MP, f/2.4, combo that only adds to the across-the-board camera value the phone delivers. There’s also a depth sensor and a 16MP selfie camera with an f/2.5 aperture, which make five cameras in total across both sides.

Xiaomi has trickled down its shooting modes from its more premium line down to its Redmi Note 10 Pro. The Pro Mode engages all the shooting lenses — wide, ultra-wide and macro, with RAW support across all three, and offering up to 30-second exposure and an ISO of up to 6400, in capable hands, the potential is through the roof. What the phone does miss out on is 4K 60fps video, instead, climbing up to 30fps at max resolution, and 60fps at Full HD.

Good light and a steady hand, matched with a still subject and your Redmi Note 10 Pro can capture fantastic amounts of information that can be cropped into five times comfortably. With no OIS, the phone struggles more than the flagship Mi 11 and Galaxy S21 Ultra, both sporting 108MP sensors. As a result, photos captured indoors with less light aren’t quite as croppable, and backlit or challenging scenes can be hit and miss. 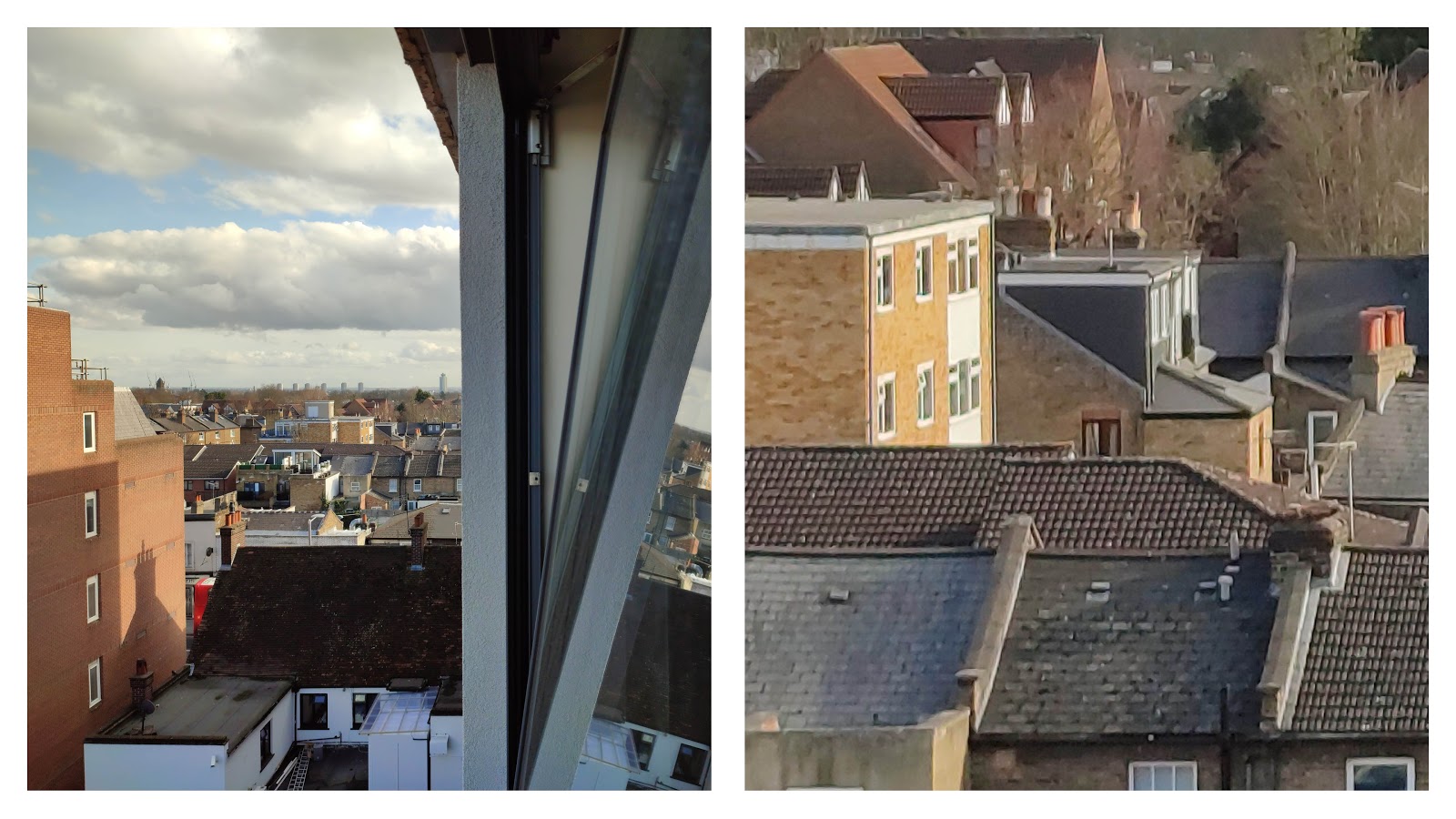 The 108MP mode is a gamble, but if you’ve got an even spread of abundant light, it can pay off, with the image above illustrating a 108MP photo on the left, and a 10x crop of it on the right,

Colour and saturation are a bit muted when compared to the zingiest smartphones out there, and this should suit many after a more natural-looking photo in automatic mode. When the lights drop, contrast climbs a bit and things start to look a lot more ‘smartphoney’, so the Redmi Not 10 Pro definitely isn’t beyond reproach.

The ultrawide camera is significantly softer than the main camera, and its colour accuracy isn’t always matched. This makes it the least impressive module on the device, though is still a nice to have for landscapes and middling quality group shots. A boon for it is the fact it supports night mode, which isn’t always a given on secondary cameras.

Unlike the Asus ROG Phone 5, the Note 10 Pro doesn’t fire up full-blown night mode automatically, and its night mode doesn’t keep the shutter open as long. That said, if you remember to switch modes when the lights dim, you can get some striking HDR-a-like low light photos. If your subjects are moving and you use automatic mode in dim lighting though, the results don’t hold up so well, creating muddy blur.

As for the macro camera, it focuses between about 2cm and 8cm, and is a fantastic, creative addition to the mix. From fingerprints to the fine detail of a walnut or flower, it unveils a world unseen, which is something other smartphone macro cameras fail to do, especially budget ones. 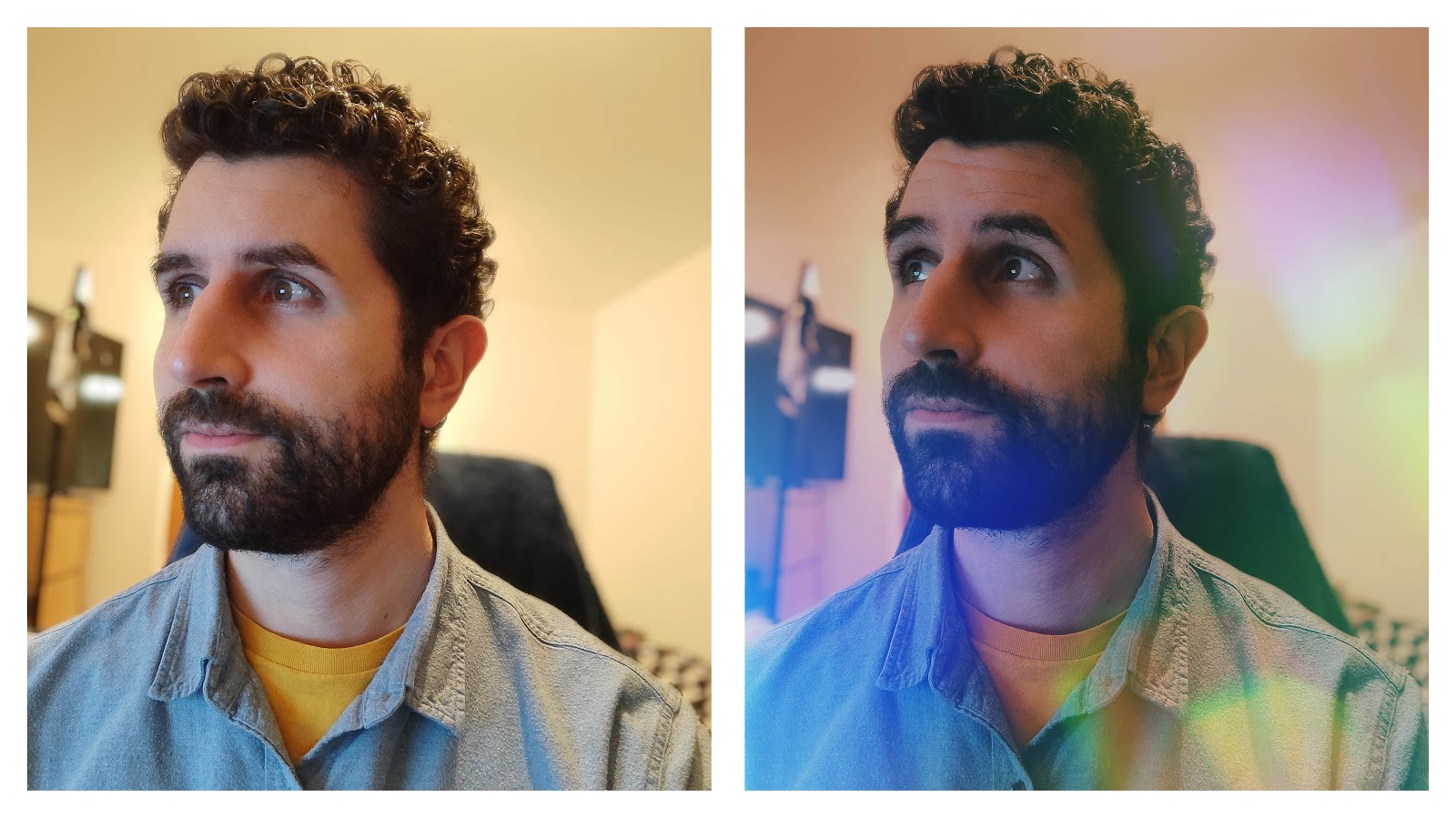 Also impressive is the Note 10 Pro’s selfie camera. Despite the specs not reading exceptionally, and a lack of autofocus, its modes open up some fun creative flourishes for the price, and the pure quality of its photos isn’t bad. Portrait mode supports adjustable background blur post-capture, and you can overlay lomography-a-like effects too without the need for a third-party app.

With 4K video that benefits from electronic image stabilization, while we expect all budget phones to drop the ball in some big way, the Redmi Note 10 Pro checks more boxes than any other camera phone in its price category.

With Qualcomm Snapdragon 732G power, matched with either 6GB or 8GB RAM, you get midrange internals powering the Redmi Note 10 Pro, and that’s no surprise or disappointment. Running Android 11, app support is excellent, and while MIUI 12 is overbearing on the €749 Xiaomi Mi 11, on the $279 Note 10 Pro, it’s easy to justify given everything the phone can do.

Swipes are smooth, it’s responsive and MIUI 12 has always looked good. You do get adverts within the UI when installing a new app, though these can be disabled.

With 64GB or 128GB storage, as well as microSD card support, the Redmi Note 10 Pro gives you plenty of room for your 108MP photos and 4K videos, and thanks to a 5020mAh battery, lasts all day, and longer if you’re happy dropping the screen refresh rate. It even packs faster charging than the iPhone 12 Pro, with 33W speeds that power it up 50 percent in 27 minutes, and 100 percent in a little over an hour.

The worst thing about the Redmi Note 10 Pro is how difficult it is to find. It launched with availability on Aliexpress, you can import it now into the US or UK, but  it won’t be enjoying a much wider release until April.

That said, if you do find it and need a low-cost smartphone, it’s hands-down the easiest budget device to recommend right now, especially for photography enthusiasts looking for a steal. Sure, it isn’t the best camera phone of 2021, but it’s definitely the best budget camera phone of the year, and a benchmark for smartphones going forward.