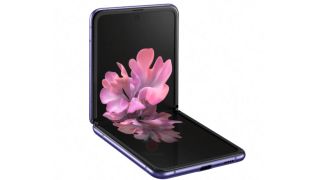 Samsung's Galaxy Fold was a totally mixed bag. Many who used it loved the novelty factor, switching between a tab and phone with a fold. That said, the hybrid phone/tablet went through a recall and most were left cold by its fragility. Fast forward a few months and Motorola's RAZR announcement received a much warmer reception from media, owing to a combination of nostalgia-factor and the foldable's more practical design - though it hasn't hit the shelves just yet. Now, Samsung looks set to embrace this more traditional flip phone styling for its next foldable - the Samsung Galaxy Z Flip

What could make the Galaxy Z Flip different to other foldables is the fact it is rumored to use ultra thin glass as opposed to plastic, which is used on all other foldables, from the Huawei Mate X through to the Samsung Galaxy Fold. In turn, this could create a richer swiping and tapping experience, not to mention better resistance to scratches and scuffs.

Other spec leaks suggest the phone's screen resolution will be Wide Full HD, that the display will have a punch hole selfie camera and the phone will run on a Qualcomm Snapdragon 855 processor.

Additionally, the camera specs look set to suffer when compared to the upcoming Samsung Galaxy S20-series, with the renders showing off a dual camera around the back. This is comprised of a 12MP, f/1.8 main camera and a secondary 12MP ultra-wide-angle camera.

Expected to launch alongside the Samsung Galaxy S20-series on February 11, unless it's affordable, the Galaxy Z Flip is clearly a continued peek into a foldable future , while the S20s are set to be the phone most Galaxy fans will actually buy.