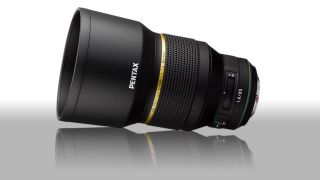 The tentative name for the new portrait lens is the HD PENTAX-D FA* 85mm F1.4, and it’s being shown at the CP+ 2019 exhibition in Yokohama. Amazingly, this looks like the first f/1.4 85mm portrait lens for full-frame Pentax cameras including the latest Pentax K-1 Mark II, as neither Pentax nor third-party makers currently offers one for sale in the Pentax K-mount. This alone will make it an important addition to the Pentax lens range.

An 85mm lens is the classic focal length for portraits because it allows the photographer to stand far enough back to get flattering facial proportions while still being able to work in typical indoor environments.

The f/1.4 maximum aperture will allow creamy background blur, which is a favourite technique for portrait photographers. It will also make it easier to shoot in low light without camera shake. The new lens does not have image stabilisation, but all Pentax bodies have SR Shake Reduction technology built in.

The ‘*’ in the HD PENTAX-D FA* 85mm F1.4 name refers to Pentax’s new ’star’ range, a series of lenses that have been completely redesigned to allow for current and future camera improvements.

There’s no decision from Pentax yet, however, about when the new lens will be released and how much it will cost.

Pentax is also showing a new wooden version of its KP DSLR. This is actually just an optional add-on grip that’s made of wood and there will be an optional top cover too. The Pentax KP body has been designed for clip-on grips to suit different tastes, so this has not required any major re-engineering.

Tentatively called the Pentax KP Custom, this new DSLR variant has no definite release date or price either, which is a little surprising, given Pentax’s fondness in the past for producing DSLRs in all sorts of different colors.