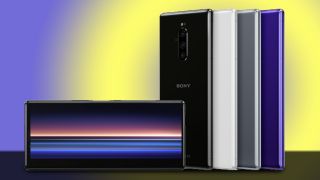 Marking a departure from past Sony phones in a few key areas, the Xperia 1 drops the pixel count of its main sensor by comparison to predecessors. It also ups the number of cameras around the back, introduces some Sony Alpha tech to the line and features a seriously long display.

It's Sony's attempt to earn its place amongst the best camera phones on the market, and you can find out more in our Sony Xperia 1 hands on review.

The Xperia 1 costs £850 SIM-free in the UK, and can be had on-contract with most of the big networks, including EE, Sky Mobile and O2. Available in three colours – black, grey, purple and white, the grey version is exclusive to Vodafone in the UK.

For that lofty price tag, you get a true flagship phone experience. The design is a combination of aluminium and Gorilla Glass 6. It sports a 6.5-inch OLED screen, which includes HDR support, Sony’s X-Reality Engine and Bravia tech to help upscale content.

While Sony has dropped the pixel count of its camera sensors, it’s upped the resolution of the display, from 2K in the XZ3 to 4K on the Xperia 1. That makes it the world’s first 4K OLED display, delivering both clarity and depth, and bettering anything else out there on paper.

Power under the hood comes in the form of a Snapdragon 855 processor, Qualcomm’s flagship chipset that can be seen in such delights as the Samsung Galaxy S10 and Xiaomi’s Mi9. It’s a well-reviewed processor, and it’s coupled with its 6GB RAM, should make for a decent performance experience.

Thankfully, storage specs of the phone read well too, with 128GB internal storage as standard in the UK, not to mention micro SD card support for up to an additional 1TB – plenty of space for all your 4K HDR content.

With a 3330 mAh battery under the hood, and 18W fast charging support, it shouldn’t take too long to power up, though we’re a tad concerned about how long it might take to discharge, with most 6.5-inch screened phones packing significantly larger batteries.

There’s also no wireless charging, though there is NFC and USB-C connectivity, as well as a fingerprint scanner on the right side of the phone.

Along with the screen, the most exciting aspect of the Xperia 1 is the camera. Sony’s finally departing from its 19MP sensor introduced a few generations ago, replacing it with a triple camera set-up, with each camera clocking in at 12MP.

Another highlight feature of the camera is eye-tracking, a world-first smartphone feature that has originated in the Sony’s Alpha line to help portrait shots achieve the precision photographers crave. The phone also features 10 fps burst shooting with AF/AE tracking too.

Sony’s legacy video achievements also features heavily here, from 960FPS through to 4K HDR video capture. This time around though, these are supplemented by something new - Cinema Pro. This app that captures video with more manual controls than we’ve ever seen from a pre-installed smartphone camera app. It also takes advantage of the Xperia 1’s 21:9 screen too, and shoots in a very flat, cinematic colour profile.

We’ll have to wait and see if Sony’s goals of dethroning the dominators are realised, especially from an imaging point of view. In the meantime, if you’re craving more Xperia 1 impressions, head to our hands-on review with the phone.