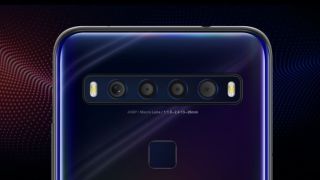 While they were officially introduced back in April, it's now been announced that the TCL 10 Pro and the TCL 10L will be going on sale in North America starting from 19 May. Both phones will initially be sold on Amazon, but they'll be extended to BestBuy Walmart and other carriers in Canada later throughout the summer.

The TCL 10 Pro will be priced at $450, while the TCL 10L will be a budget friendly $250. The TCL 10 Pro will have a curved 6.47" FHD+AMOLED display with a teardrop notch for the 24MP front-facing camera and a built-in fingerprint reader in the bottom middle of the phone.

As reported by GSMArena, the TCL 10 Pro will also have four cameras mounted on the back of the handset, which will include a 64MP main camera, a 16MP ultra wide lens, a 5MP camera built for low light and a 2MP time-of-flight camera for depth. The 10 Pro has the Snapdragon 675 SoC with 6GB of RAM and 128GB of extendable storage and its battery is rated at 4,500 mAh.

Meanwhile, the more affordable TCL 10L has a 6.53" LCD panel with a punch-hole cutout for its 8MP front-facing camera. Similarly to the 10 Pro, the 10L also has four cameras on the back. However, these aren't quite as impressive as the Pro's. The 10L will have a 48MP main camera, an 8MP ultra wide camera, a 2MP macro camera and a time-of-flight camera.