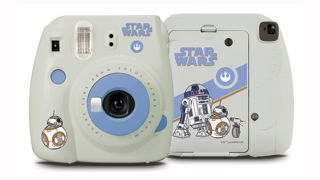 Star Wars fever is about to grip sci-fi and movie fans once again, with the ninth film in the George Lucas blockbuster franchise set to hit our screens from December 20. And as ever, the movie will come with its own accompanying spaceship full of memorabilia and collectibles. And along for the intergalactic ride this time around is a new Star Wars Instax camera, and a Star Wars film pack.

The Fujifilm Instax Mini 9 Star Wars Instant Print Camera is essentially a sage green version of one its most popular instant cameras, with blue colored accents. There is a Star Wars logo too, and decals of every fans favorite robots R2-D2 and BB-8, and newcomer droid D-O.

The camera has so far only been announced for sale in the United States, and will sell for $79. It is available for pre-order at B&H.

Also released ahead of Star Wars: The Rise of Skywalker, is a movie-inspired Instax Mini film pack. Each of the ten prints has one of five different borders to surround your images with illustrations of key characters from the Empire and the Resistance. The film pack can be used in any instant camera that uses Instax Mini film.