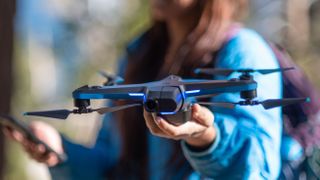 Update The American-made Skydio 2 has been, up to know, one of the best drones that you couldn't buy. At last we have the news that the self-flying drone is back in production in its California factory after the long Coronavirus lockdown – and that means that you can now order one (although the company admits it will take them three months to get through previous back orders).

But at the same time, Skydio also tells us that since the $999 drone was originally announced last year (see below), it has made major updates to the software.

"Our most popular feature request is here! We’ve worked hard on updating Skydio Autonomy, our breakthrough AI engine, to be able to track you from further away for those awesome framing shots of both the subject and the surrounding landscape," says the company announcement "Maximum tracking distance with the Skydio Beacon has increased from 10 meters to 40 meters (130 feet). Maximum tracking distance with the phone has increased from 10 to 20 meters (66 feet)."

There are also improvements to the landing capabilities of the drone - it can now be made to land on the drone's carry case - using the company logo a its destination. And a new nudge feature, allows you to shift the landing spot slightly if you see the drone coming down in, say, a puddle.

Original story 01 October 2019 - For some months, Californian drone company Skydio has, as they put it, been selling their equivalent of the Tesla Roadster, the expensive proof-of-concept. Its breakthrough with its firs drone, the R1, was autonomy... the ability  to follow its owner through forests and down mountains. But at $2,500 and with what the company itself called “a very narrow feature set” the Skydio R1 wasn’t for everyone (even if we rate it as one of the best camera drones). The Skydio 2, announced today, is set to change things.

The new drone has a far more palatable price point, $999, still features the unparalleled AI-driven smart cinematography system, but adds the features the wider drone market has come to expect. In other words the Skydio can be both the angel over your shoulder capturing amazing action moments as you concentrate on your sport, your flying camera for landscapes and events, and even a DroneDeploy-compatible surveying tool.

Part of that newfound flexibility comes via the optional Skydio Controller. The $149 device is visually identical to the Parrot Anafi controller (no bad thing) and has a 3.5km range. It gives the option of traditional 2-stick flying, so you can direct your own swooping landscapes and establishing shots like any other drone. Under manual control the pilot is, of course, still able to take advantage of all-direction obstacle avoidance. You might feel, after checking air regulations in some countries, that the Controller is even a legal necessity.

There is also the Skydio Beacon, also $149. This compact wand can be used to position the Skydio 2 at up to 1.5km as well as having tactile buttons to initiate dronies. It also has the advantage of being something you might take somewhere you wouldn’t take your phone

Although it is pretty compact, the blue-colored Skydio 2 does not fold – a measure to ensure the accuracy of the navigation cameras. There are six of these, each with 4K Sony cameras which combine to give the AI system 48 megapixels of information with which to build its understanding of the world around it (The Mavic 2, DJI’s best equivalent, has under 5 megapixels for its object collision system). The body must also act as a heat-sink for the on-board NVIDIA Tegra Jetson TX2 which tracks the 3D world at over 1 million points a second. It is capable of identifying people and vehicles – up to ten simultaneous points of interest – using 256 GPU cores.

In terms of photography, the main camera is a Sony 1/2.3” 12.3MP CMOS which captures video at 4K and 60fps H.264 or H.265, or 12 megapixel JPEG or RAW, through a 20mm EFL lens. That makes it competitive with other similarly sized drones. Skydio call it “best-in-class” and provide a NomiCam report comparing it favorably against all the DJI Mavic series drones. It is also supported by a 3-axis gimbal which projects from the front, blending into the design more than many ‘copters.

The aircraft features folding props and ships with one battery, a USB 3 lead for charging, and a USB 3 plug, and a hard-shell case. The flight time is 23 minutes and with a weight of 775g and the max speed is 36mph.

You can pre-order the Skydio 2 now, with shipping set to start before the end of November.