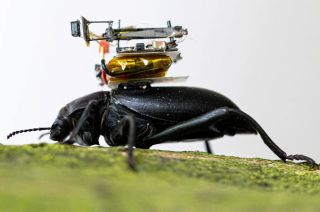 We think of a small camera being something inside a camera phone, but researchers at the University of Washington have taken miniaturization to a whole new level and created a camera so compact it can be carried on the back of a beetle. Weighing just 248 milligrams - or just under one quarter of a gram - it's so small and light that a Pinacate beetle is able to carry the camera like a backpack and still move and climb obstacles naturally.

Don't go thinking this "GoPro for beetles" is some 4K, high frame rate monster though. The focus here is on keeping things as small and power-efficient as possible, so video quality is limited to 160x120 resolution, monochrome footage, at just a maximum of five frames per second.

There are some neat tricks though, as the camera can wirelessly transmit its live video feed via Bluetooth to a smartphone up to 120 metres away. What's more, the camera is mounted on a tiny piezoelectric actuator arm that bends when a voltage is applied to it, giving the camera the ability to pan left and right by up to 60 degrees when remotely controlled by the smartphone operator.

This approach allows the camera to capture a wide field of view using a small, low-energy sensor. The alternative would be to have a fixed wide-angle camera, but that would have necessitated a much higher resolution sensor to maintain the same level of detail over the whole field of view, thereby significantly raising power consumption.

The researchers got their inspiration for mounting the camera on a movable arm from insects themselves; specifically, their simplified, low-energy vision. Insects only have high visual acuity in very small regions of the retina, meaning that to accurately track moving objects they must physically move their heads. This approach is more energy-efficient in nature and also for the beetle camera backpack, enabling up to 6 hours of runtime from just a 10mAh battery, partly thanks to an onboard accelerometer that only triggers image capture when the beetle is on the move.

Such a minuscule remote controlled camera has obvious appeal for being able to capture a bug's-eye view of the world, allowing us better understand nature and the planet. But there are other intriguing possibilities in the field of insect-scale robotics. The University of Washington boffins also built a tiny 1.6x2cm robot that can move at up to 3.5cm per second. With the steerable vision system of the beetle cam the robot was able to track objects while consuming between 26 and 84 times less energy than by moving the whole robot. Thinking outside of the research lab, such tiny energy efficient robotics could prove invaluable for gaining visual access to hard-to-reach spaces, like inside complex machinery to help diagnose faulty components where a conventional borescope couldn't reach.

The best microscopes you can buy

The best borescopes and inspection cameras