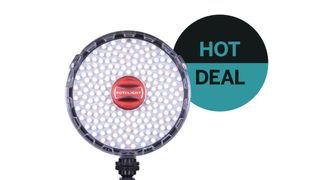 The Rotolight NEO 2 is one of our favorite LED light panels - and also one of the most innovative. With the ability to function as either a continuous light or a flash, the Rotolight NEO 2 LED light is perfect for both photographers and videographers! We have just spotted that this is now available for $149 at Amazon.com.

You can also get this same deal at Adorama - but this 24-hour deal ends at midnight (ET) on 16 June.

One of the most exciting parts of the Rotolight NEO 2 LED light is the inclusion of a built-in 2.4 GHz Elinchrom Skyport Receiver. which enables support for high-speed sync and remote triggering of the unit from up to 656" away when using an optional Skyport Transmitter.

With both continuous and flash modes available to quickly switch between and a rated CRI of 96, the Rotolight NEO 2 LED light is perfect for professionals. The overall output of the light is rated at about 85% greater than its predecessor, while the flash mode provides  about 500% more light output when connected to a mains power source, or 250% when running on AA batteries.

No matter whether you shoot photos or video, this Rotolight NEO 2 LED light is the perfect lighting companion for your next project.

The best LED panels for photographers