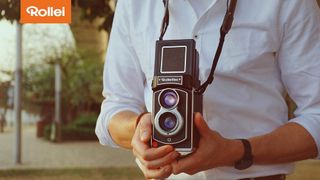 That picture is already exciting, right? Everyone knows the iconic design of the original Rolleiflex twin-lens reflex cameras, even those who know basically nothing about photography. And now, you’ve got a chance to shoot with a brand new model yourself. Sort of.

Presenting: the Instant Kamera, a new Rolleiflex camera that shoots on Fujifilm’s Instax instant film. So, no, it’s not exactly the same as the cameras of old, but once you dig into the Kickstarter campaign it does look pretty cool.

Naturally it uses a twin-lens reflex system, on the front of which is a three-element aspherical lens with a focal length of 61mm. It’s also possible to manually adjust the focusing, and the minimum focusing distance is 48cm.

The Fresnel anti-glare coated viewfinder allows for waist-level shooting, and it boasts a 1:1 magnification ratio to provide an accurate view of the scene in front of you. The lens can have its aperture set to f/5.6, f/8, f/16, f/22 and a setting called Bokeh, while shutter speeds can be set between 10-1/500sec.

The camera has a built-in flash and is powered by three AA batteries, with an overall weight of 525g. There’s also an ambient light meter, as well as multiple exposure and long exposure modes.

This represents the first new Rolleiflex camera in more than five decades. The original Rolleiflex TLR made its debut in 1927, and the last one was released in the 1960s. The design was originally invented in the trenches of World War I by German Reinhold Heidecke, in 1916, with the periscope effect allowing for taking photographs while hiding from enemy fire.

The new Rolleiflex Instant Kamera is currently funding on Kickstarter and will be until 31 May. Unsurprisingly, it has already broken through its target, although you'll need to pledge at least HK$3099 (about £283) in order to get hold of one. Head to the official Kickstarter page to make a pledge. It’d be best to hurry though, as many of the packages are limited in number.

The makers say that the camera is expected to ship in October 2018.

Read more: "Most portable tripod ever created" launches on Kickstarter