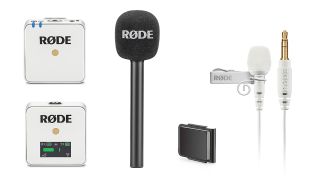 Rode has expanded the range of options and accessories in its Wireless GO family that it launched last year. The miniature wireless microphone will now be available in white, in addition to the original black – which may well be particularly appealing to wedding shooters. In addition there is a magnetic mounting system, which allows you to attach the transmitter to your talent without the need to use the built-in clips – and again this will have appeal to formal occasions.

The Lavalier GO tie-clip mic will also be available in white as well as black – but even more exciting is the arrival of a stick microphone for the Rode system. The new Interview GO is not a microphone in its own right, but instead is an adaptor for use with Wireless GO transmitter, turning the built-in omnidirectional mic into a reporter-style stick microphone, measuring 237mm in length.

The Rode Wireless GO is one of the best microphones for vlogging around, thanks to its small size and affordable pricing. The receiver and transmitter weigh 31g each, and both measure  44 x 46 x 18.5mm. The pair operate in license-free 2.4GHz radio range for easy of operation, and offer an operating range up to 70m apart.

The new white Rode Wireless GO will sell for the same price as the original black option, at $199/£179 for the transmitter and receiver kit - which has everything you need to get started with the system.

Similarly the white Rode Lavalier GO will cost the same as the black version, retailing for $79/£59.

The new Interview GO stick adaptor (only available in black) will sell for $29/£25.

The best microphones for vlogging and filmmaking in 2020

The best 4K camera for filmmaking in 2020