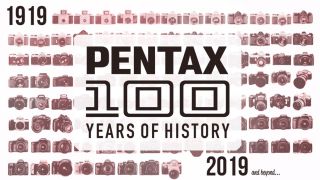 November 2019 marked the 100th birthday of Pentax, which was established in a suburb of Tokyo to begin making lenses for spectacles (an area of optics that the company is still involved in). This led to the manufacture of lenses for cameras and then, in 1952, to the Asahiflex camera – the first Japanese-made 35mm SLR.

The name ‘Pentax’ was adopted in 1957 for a camera which set the basic formula for the 35mm SLR (and, of course, its digital derivative). Consequently, Pentax is generally acknowledged as the pioneer of the 35mm SLR, being the first to produce such a camera in significant numbers.

Pentax further popularised the 35mm SLR with the Spotmatic series – first introduced in July 1964 – which became the camera of choice for a legion of amateurs, professionals and celebrities. At the end of the 1960s, Pentax introduced its first medium format camera – the legendary 6x7 – which adopted the same configuration as its 35mm SLRs. It did the same thing in 1978, but this time with the miniature 110 film format, creating the Auto 110; the only 110 SLR with interchangeable lenses.

Another important milestone was the Zoom 70 (1986), the world’s first 35mm compact with a zoom lens and another design that became the blueprint for everybody else.

Pentax was prolific during the 1980s and ’90s with numerous 35mm compacts and SLRs, introducing or adopting every major design trend and technologies. Like all the camera makers, it dabbled with still video in the late 1990s before switching to digital and again producing numerous compact and DSLR models.

Today, the Pentax brand is owned by Ricoh which, not surprisingly given the heritage, continues to concentrate on DSLRs, both APS-C and full-35mm. However, Pentax was an early pioneer of mirrorless cameras with its tiny Q series models – another example of the company’s lateral thinking – and the short-lived, but interesting K-01. Of course,

Pentax is also known as the creator of the K-mount bayonet fitting which was introduced in 1975 and has since been used on many millions of accessory lenses.

In Australia, Pentax products have been distributed by C.R. Kennedy & Company since 1954. It was the first independent distributor appointed by the camera-maker and is now the longest-serving at 65 years. Notably, at various times over this period, Pentax has been the number one camera brand in Australia, something it has never achieved elsewhere in the world.

C.R. Kennedy & Co. recently staged a 100th birthday party for Pentax which was held in Sydney and attracted nearly 200 ‘Pentaxians’, supporters and camera retailers. Many attendees brought along classic Pentaxes and everybody received a commemorative ‘Pentax 100 Years’ metal body cap… no doubt destined to become a collectible piece of memorabilia in the future. CRK also launched a range of commemorative merchandise, including T-shirts, caps and pins.

The best Pentax lenses in 2020: our top lens suggestions for your Pentax camera
Pentax KP review