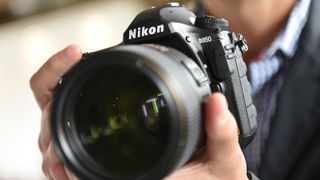 A month after it first announced the model as being on its way, Nikon has today confirmed full details of its latest D850 DSLR.

The D850 updates the popular D810 that was announced back in 2014, and it becomes the most senior full-frame model after the flagship D5.

Up until today, Nikon confirmed little beyond the fact that it would be the successor to the D810 and that it would record 8K time-lapse footage. Now, we know all the details.

Nikon D850
Adorama
$1,999
View
We check over 130 million products every day for the best prices
View All Deals

The D850 is aimed at nature, fashion, commercial and wedding photographers. This probably sounds like a particularly broad range of applications for any camera, although the marriage of a high-resolution sensor and fast frame-rate capabilities makes this targeting perfectly reasonable.

Unsurprisingly, Nikon has opted for a new 45.75MP sensor for the D850, which is a significant step up from the 36.3MP sensor inside the D810. As with the sensor inside that camera, it’s an FX-format (full-frame) sensor that doesn’t have an optical low-pass filter in front of it, which should help it to record finer details than would otherwise be possible.

The D850's sensor also features gapless microlenses and a back-illuminated construction. The latter of these is now commonplace among the small sensors inside compact cameras, but among full-frame interchangeable lens cameras, it's only something that's really been seen inside some of Sony’s recent models. Indeed, to date, Nikon has not claimed this on any sensors inside its own DSLRs.

The D850’s sensor can be operated between an ISO range of 64 and 25,600, and can be expanded to settings equivalent to ISO 32-102,400, which appears to make it very flexible. This sensor is partnered with Nikon’s EXPEED 5 processing engine, the same that we saw inside the most recent D500, D7500 and D5 DSLRs.

t’s also now possible to save Raw files in three different sizes: Large, Medium and Small. Large saves the image at the full 45.7MP sensor resolution, while Medium knocks this down to 25.6MP and Small to 11.4MP. You can also batch process raw files in camera, with 1000 files taking about 25 minutes in total, according to Nikon.

Prior to today, Nikon did reveal that the D850 would be capable of recording 8K time-lapse footage, and teased the arrival of the new model with a video that underlined this feature (below).

This is complemented by standard video recording to the 4K UHD (3840x2160p) resolution. Unlike some rival models, 4K footage is recorded at the full width of the camera’s sensor, which means that there is no crop factor applied (save for the aspect ratio crop to 16:9).

The camera’s processing engine allows for continuous shooting at a rate of 7fps at its maximum resolution. The buffer depth is also an impressive 51 Raw frames when recording 14bit files. Additionally, when using the new MB-D18 battery grip and EN-EL 18B battery, you can boost the camera’s burst rate to 9fps.

Both the D5 and D7500 made use of a 180k-pixel metering sensor, so it’s no great surprise to see Nikon including this on the D850. This performs all sorts of analysis, such as face detection, highlight analysis and light-source identification, which in turn informs the camera’s Active D-Lighting, white balance, flicker reductions and so on. More recent metering options such as Highlight-weighted metering are also on board.

The D850’s autofocus system is the same Multi-CAM 20K module (above) that featured inside the D5.

This offers 153 AF points in total, with 99 of these being cross type. The system is rated down to an impressive -4EV – useful in low light – although that only refers to the central point; every other point is sensitive down to -3EV.

Focus stacking has also now been added, and you can shoot up to 300 frames for images with particularly expansive depth of field. Of course, you don’t have to capture all 300 frames – you can simply select however many you want.

When doing this, you can select focus steps from 10 different levels and also have the camera release the shutter in intervals between 0-30sec.

The Fine Tune AF feature has also been revised to better guide users when compensating for small focusing issues.

Nikon has used a 3.2in LCD screen with a 2.36million-dot resolution for some of its most recent models, and this makes the cut here.

This has been designed on a hinge so that it can be pulled away from the camera and tilted up and down, and it's fully responsive to touch too. Although we’ve seen this before, Nikon has revised the touchscreen functionality for this new model, and says that the control offered here is the most extensive yet.

One neat feature is the ability to touch the screen to focus in live view and have the camera immediately take the shot, and lock this point of focus so that you can simply carry on shooting subsequent frames with the shutter release button.

The pentaprism viewfinder features an aspherical lens and new condenser lens, but what Nikon is particularly proud of is the fact that is has a 0.75x magnification. This is very respectable for a full-frame camera, and is even higher than the 0.72x magnification on the flagship D5 model. Coverage of the scene is 100%.

The camera's body is "extensively" sealed against dust and weather, with a 200K-shutter on the inside, and it also features the same illuminated rear controls we’ve seen before. This will no doubt be a godsend for those used to working in tricky lighting conditions.

In line with other professionally targeted models, the D850 follows the D810 in offering two card slots around its side, although the company has opted for SDHC/SDXC (UHS-II rated) and XQD slots here, in contrast with the CompactFlash and SD-type slots that featured on the D810.

One new addition on the inside is a silent shutter when using live view, which captures images at full resolution without any sound at all. You can capture at 6fps in full resolution, or at 30fps at an 8.8MP DX crop format.

Nikon claims you can get up to 1840 shots from single charge EN-EL15a battery, which is pretty impressive when you consider that the D810 only managed 1200 frames.

Using the new battery grip, however, boost this considerably to 5140 images when using the EN-EL18b battery in conjunction with the camera's own battery.