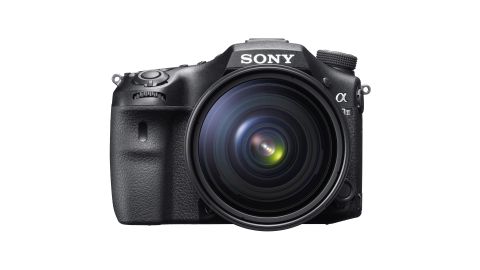 The A99 II’s specs are stunning. Never before have photographers been able to shoot at these frame rates and this resolution. The 79/399-point hybrid AF system is impressive too. The EOS-1D X II and Nikon D5 still have the edge for sports photographers, though, and if you don’t need the 12fps frame rate AF, the mirrorless A7R II is more tempting.

Just when we all thought the Alpha 7 series was the future for professional full-frame Sony stills and video photography, the company drops a bombshell with the Alpha 99 II. This is a throwback to Sony’s early experiments in SLR alternatives. It’s like a mirrorless camera… but with a mirror.

In fact, it’s a fixed, translucent mirror, which passes light through to the sensor at the back of the camera, but also feeds a dedicated SLR-style phase-detection autofocus sensor in the base of the pentaprism housing.

The A99 II has two key selling points. First, it combines a high resolution with high continuous shooting speeds. It has the second-highest resolution of any full-frame camera at 42.4MP, but it can also shoot at this resolution at up to 12 frames per second.

It’s within a whisker of Nikon D5 and Canon EOS-1D X II speeds, but it doesn’t have their buffer capacity. It can still capture 54 raw+JPEG images, though. AE/AF tracking in the 12fps H+ mode does require lenses compatible with the new hybrid autofocus system that is the A99 II’s second key selling point.

These two systems work together, depending on the autofocus mode that’s been selected. 15 of the 79 AF points on the dedicated AF sensor are cross-type, but the remaining AF points overlay corresponding AF points on the main sensor to provide a kind of hybrid cross-type AF. Beyond this 79-point area the on-sensor AF points can pick up subjects moving quickly and erratically around the frame. The 42.4MP sensor has no anti-aliasing filter, and it’s matched up with a Bionz X processor and front-end LSI that delivers widely expanded sensitivity (up to ISO 25,600, or 102,400 in expanded mode), extra-low noise, and even diffraction compensation at smaller lens apertures.

The A99 II also incorporates in-body five-axis image stabilisation and impressive video capabilities, which include full-frame 4K movies or high-resolution oversampled 4K without pixel-binning in the Super 35mm format.