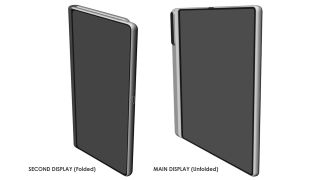 No sooner has Huawei wowed us with its Mate X folding camera phone, details have just been revealed by letsgodigital.org suggesting a possible Mate X II.

Where the current Mate X grabs your attention with its monster 8-inch unfolded screen that folds down to a 6.6-inch front pane when the phone is in its pocket-friendly folded position, the screen is always facing outward. Great for speed and ease of use, but not such a good idea when the phone is in your pocket or a bag where all that screen area is vulnerable to knocks and scratches.

The leaked renders for Huawei's upcoming foldable phone show a screen that folds inwards, more like a book. This solves the vulnerability concerns around the current Mate X, but creates a whole new problem of you not being able to instantly check for notifications when the phone is in its folded position.

Like the current Mate X, the renders show a prominent side bar containing the phone's cameras. Presumably these will still be manufactured in collaboration with Leica, unless it does a Google and also leaves Huawei in the cold.

We can also see from the renders that the new phone uses a more rounded chassis design than the Mate X, and it may well be a premium metal construction with a matte finish.

This leaked patent of a possible Huawei Mate X II comes immediately after rumors have surfaced suggesting Huawei is also working on a double-folding phone, where a section of screen folds outwards from either side of the phone body, creating a large widescreen display. In its folded form, the phone's screen would wrap around the whole body, with both display 'wings' folded on top of each other at the rear of the phone.

A screen like this with two hinge points also enables multiple usability options. The sheer unfolded size effectively gives you a tablet-size display when fully unfolded, but the leaked patent also shows one of the screen segments propping up the phone in a self-supported 'desk mode', where it's likely that one section of screen could become a keyboard, and the vertical portion takes on monitor duties.

The best camera phone you can get right now

Samsung Galaxy Fold "will not be too late"