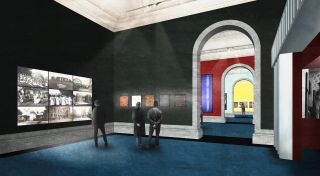 Where can you see Paul McCartney in his dressing gown, the contents of an ostrich’s stomach and the world’s first-ever photograph? Head to London, step inside the Victoria and Albert Museum’s brand new Photography Centre, and allow yourself to be transfixed by the earliest photographic experiments and cameras – as well as images from the world’s most influential modern photographers.

The vast collection of works on show in their iconic South Kensington building span the medium’s history – from Daguerrotype to digital. You enter the space through an impressive installation of over 150 different cameras. At the entrance is the huge plate camera – complete with tripod, of course – that once belonged to the founding father of British Photography, Henry Fox Talbot.

Throughout the two main galleries (there used to be just one) you’ll find the world’s first negative, unique daguerreotypes and early colour photographs, as well as important albums, books, cameras and the archives of big-name photographers.

If you're wondering where all these wonderful images and cameras have come from, the answer is a little messy. At the heart of the Centre is the Royal Photographic Society (RPS) Collection, which charts the invention and development of photography over the last two centuries. Many treasures have also travelled from The National Media Museum in Bradford, and some were once part of a single collection at the original South Kensington Museum (before it divided into the V&A and the Science Museum).

There was controversy back in 2013, when the historic RPS collection was moved from Bradford to London, but current V&A director Tristram Hunt insists the transfer was a good thing, providing the catalyst for a dramatic reimagining of photography at the museum. “Our collection now seamlessly spans the entire history of photography, telling the story of the medium from the daguerreotype to the digital. In an era when everyone’s iPhone makes them a photographer, the V&A’s Photography Centre explores and explains the medium in a compelling new way.”

Scroll to see all the images above...

Scroll to see all the images...

If you’re a lover of exhibitions, rather than just wandering and taking it in, the first major display is called Collecting Photography: From Daguerreotype to Digital, which explores photography (with over 600 objects) as a way of ‘collecting the world’. The display features images by early colour photography pioneers, Agnes Warburg, Helen Messinger Murdoch and Nickolas Muray, and recent acquisitions by Hiroshi Sugimoto, Linda McCartney (that touching family image of Paul McCartney we were referring to) and Mark Cohen. A ground-breaking botanical cyanotype by Anna Atkins, images by the world’s first female museum photographer, Isabel Agnes Cowper, and motion studies by Eadweard Muybridge, join photographs contemporary photographers, including Cindy Sherman and Martin Parr.

Martin Barnes, Senior Curator at the Photographs at the Victoria & Albert Museum, gives a video tour of the historic collection of pictures and cameras that are now at the V&A in central London

What's on and where is it?

The opening of the V&A Photography Centre kick-starts a month-long Photography Spotlight across the museum, with talks by leading photographers Mary McCartney, Rankin and Chris Levine, special performances, events, courses and workshops and a photography-themed Friday Late on 26 October.

A second phase of the Photography Centre is planned to open in 2022, set to include a teaching and research space, browsing library and studio for photographers.

The V&A Photography Centre is free to view. It is open daily from 10am to 5.45pm.... with late night opening until 10pm on Fridays. The address is Cromwell Road, London, SW7 2RL; the nearest tube station is South Kensington.