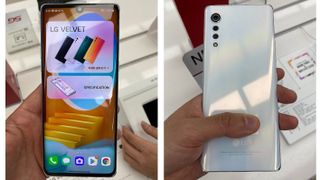 Rumors of the LG Velvet have been bouncing around for a while now, but we haven't seen the full specs of this upcoming smartphone until now. Photos of the LG Velvet were taken in a Korean store and uploaded onto an internet forum, giving the rest of the world ample opportunity to pore over the full specifications.

While most of the specs had already been leaked, there are a few new tidbits of information that are certainly interesting. The LG Velvet is apparently sporting the Snapdragon 765 5G SoC, which means that the Velvet will be capable of 5G. It'll also have a 6.8" Full HD+ OLED panel, 8GB of RAM and 128GB of internal storage – if you need any more storage space the phone is also capable of supporting microSD cards up to 2TB.

The LG Velvet will feature a 48MP main camera, an 8MP ultra-wide camera and a 5MP depth sensor (used to improve 3D imaging and augmented reality) on the back of the handset. The front of the phone has a U-shaped notch that houses a 16MP selfie camera.

As reported by GSMArena, LG Velvet is powered by a 4,300 mAh battery, which can be charged wirelessly. It also has an IP68 water and dust resistance certification, AI-powered stereo loudspeakers and gimbal-like video stabilization. Interestingly, it will also come complete with an ASMR video recording function too.

The official announcement should be on 7 May, while we should expect it to be on sale from 15 May. As of yet, there isn't any information on pricing, so we'll have to wait a few days to see just what kind of impact the LG Velvet will have on our wallets.