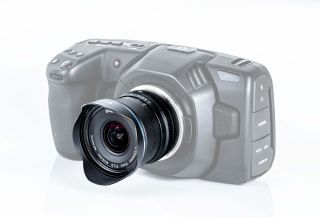 The Laowa 9mm f/2.8 Zero-D has just been launched in MFT mount – allowing it to be used on Panasonic and Olympus Micro Four Thirds mirrorless cameras. This was one of a number of new lenses from the Chinese manufacturer Venus Optics that was announced at Photokina last year. The lens is already available in Fujifilm X,  Sony E, DJI DL and Canon EOS-M fits.

Shown for the first time at the NAB broadcast trade show in Las Vegas, the compact lens has an effective 18mm focal length when used on an MFT body. The rectilinear wide-angle promises a near-zero distortion across the frame.

The manual-focus lens is made up of  15 elements in 10 groups – there are three extra-low dispersion elements and two aspherical elements in the construction.

Originally used on Olympus and Panasonic mirrorless cameras, the Micro Four Thirds mount is also used on Blackmagic Design Pocket Cinema cameras, and will also be used on the forthcoming Sharp 8K camera.