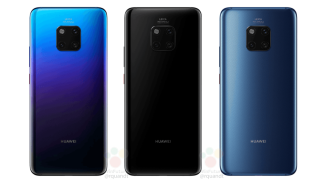 The Huawei Mate 20 Pro launch is imminent, which means the inevitable leaks are coming thick and fast. The latest one, though, is the biggest yet and shows off a camera setup that looks to be one of the best ever seen on a smartphone.

UPDATE: The Huawei Mate 20 Pro is set to launch today. Digital Camera World will be at the London reveal of the device and will be among the first in the world to get hands-on with the camera technology. Here's hoping it can match the might of its sibling, the Huawei P20 Pro.

Huawei's relationship with Leica is a strong one, and it looks set to continue with the upcoming Huawei Mate 20 Pro which, according to BGR, is set to get a huge 40MP sensor with an f1.8 aperture.

This lens, according to the leaks, will be joined by an f2.4 20-megapixel telephoto lens and the triple-camera setup will be completed with an 8MP ultra-wide angle sensor.

There's also 5x optical zoom on board and there will be support for macro shots. As you can see by the leaked pictures, the setup is a square formation situated in the middle and near the top of the device with the fourth part of the square taken up by a flash- this is something that we haven't seen on a smartphone before.

All of this backs recent leaks that the Huawei Mate 20 Pro's camera may turn out to be the best yet.

Fast charging will also be on board, it will run Android 9.0 according to the leak and it will be water resistant.

Will it be the ultimate phone snapper? Well, it will have to do a lot to match the might of its sibling, the Huawei P20 Pro and the iPhone XS - two phones that are vying to be the best camera phone around.

There is also new kid on the block, the Google Pixel 3 which does a remarkable amount with its one-lens setup. Oh, and then there's the Samsung Galaxy A9 which has four cameras on the back.

The smartphone camera market is one of the busiest and most competitive around at the moment!