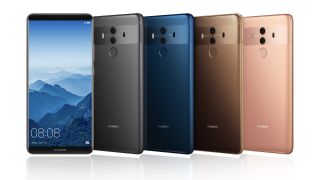 Both phones have a new, Leica-branded, dual-camera setup, taking advantage of two f/1.6 lenses around the back. There’s also a speedy scene-recognition, advanced imaging software supporting Raw shooting and long-exposure HDRs, and a giant 4,000mAh battery – over double the capacity of the ones inside the iPhone 7 or 8!

Starting with the camera specs, the Huawei Mate 10 range features the widest aperture seen on any smartphone: f/1.6. While this figure has reared its head before on the LG V30, it has never featured across both lenses of a dual-camera system – until now.

Get the best Huawei Mate 10 deals before anyone else!

We'll send you pre-order details and the best Huawei Mate 10 deals as soon as they're available.

These lenses are complemented by a versatile sensor combination. The primary camera sensor has a 12MP pixel count, and is likely to be the Sony Exmor IMX286 used in the flagship Huawei P10. This RGB sensor size is 1/2.9in in size and features 1.25μm pixels. Paired with optical image stabilisation (OIS) and that aforementioned aperture, the Mate 10 and Mate 10 Pro sound like they'll be more than capable shooters in low light.

As for the second sensor, this offers 20MP and lacks OIS, but it benefits from being monochrome. Likely the Sony Exmor IMX350, this time round it’s a 1/2.8in sized sensor with 1.0μm pixels. This second camera also enables a host of perspective effects, comparable to Portrait mode on the iPhone 8 Plus.

Before we touch on the shooting modes featured by the new Mate 10 and Mate 10 Pro, it’s worth mentioning the processor under the hood. Huawei is one of the only smartphone manufacturers around that makes its own chipsets, and with its new Kirin 970, a huge focus on artificial intelligence (AI) has been hard-wired in.

Running with a NPU, or Neural Processing Unit, the Kirin 970 is able to sort through organic image information faster than any other smartphone, according to Huawei. This feeds into the new smart scene detection feature found in the Mate 10 range. What this means is that the Mate 10 pair have an automatic mode that’s able to instantly tell the difference between dogs and cats, plants or flowers and fireworks or flickering candlelight.

As a result, you’re well-placed to get the picture you’re after in automatic mode, but the Mate 10s get really interesting if you’re prepared to delve into the manual adjustments.

The manual mode gives you complete control over your shot, with the phone’s shutter speed extending to 30+ secs. Meanwhile, predefined ‘Light Painting’ modes composite multiple low-light exposures to create light trails with no blown-out areas. Finally, there’s a blurry-background/sharp-foreground mode too, except with Huawei’s offering, you can retrospectively tweak your level of blur.

So the cameras stack up well on first impressions, but what about the rest of the specs? Both models ship with those powerful Kirin 970 processors under the hood, powering the latest version of Google’s operating system, Android 8. While the Mate 10 has a 5.9in IPS display, the Mate 10 Pro has a 6in OLED display. The Pro variant also packs an 18:9 aspect ratio, which makes it ideal for movies on the go.

Storage capacities are also a bit different across the two, with the Mate 10 sporting 64GB versus 128GB on the Mate 10 Pro. Additionally, the Mate 10 Pro also features IP67 water and dust resistance. As for the batteries, both are 4,000 mAh – a huge size whichever way you look at it, which means they should comfortably get you through a full day.

Availability of the Huawei Mate 10 and Mate 10 Pro is yet to be confirmed, and the only price we have as of yet is an Australian price of AU$899 for the Mate 10. We'll update this page when we have full details on pricing in other territories.

Read more: How to use Adobe Lightroom Mobile