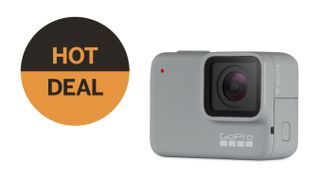 This is the best price you'll find on the GoPro Hero7 White – the awesome action cam is just $159.99 in this Walmart Black Friday camera deal, a huge saving of $60!

Walmart has some of the best Black Friday camera bargains we've seen so far, especially on action cameras (the DJI Osmo Action is currently just $279, a $100 saving), but this deal on the Hero7 is too good to resist!

GoPro Hero7 White: $159.99 (from $199)
The Hero7 White is probably the best place for newcomers to action cams to begin – and with $40 off, there's never been a better time to get started! It offers crisp 1080p video at up to 60fps, along with blistering bursts of 15fps for stills – and it's waterproof to 32 feet!
US dealView Deal

GoPro Hero 7 White: £129 (from £149)
The GoPro Hero7 White may be last year's model, but because of this it is now available at its best-ever price in the UK too!. Get this deal at ArgosView Deal

The GoPro Hero8 Black might be the new kid on the block, but that means that the Hero7 White is available for its lowest price ever – and it's still a formidable action cam, as we rank it fifth on our list of best GoPro cameras.

Ideal for newcomers to action cameras, it offers clean 1080p FullHD video at up to 60 frames per second, and possesses a continuous shooting rate of 15 frames per second for photos. So it remains a great performer for stills or video!