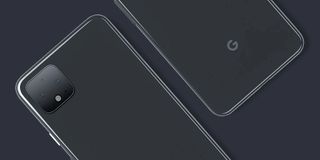 We are not expecting the Google Pixel 4 to be launched until October, but that has not stopped the rumor mill from speculating what the successor to the Google Pixel 3 will offer in terms of specification, camera features, and looks.

But now Google have replied to the rumors by posting a picture of the Pixel 4 on Twitter! That is not what we are expecting - but certainly helps to fuel the speculation to the upgrade to one of our favorite camera phones.

"Well, since there seems to be some interest, here you go!" the @MadeByGoogle tweet teases. "Wait 'til you see what it can do. #Pixel4"

Well, since there seems to be some interest, here you go! Wait 'til you see what it can do. #Pixel4 pic.twitter.com/RnpTNZXEI1June 12, 2019

Google Pixel 4: what we know

Google have traditionally updated its flagship phone annually and usually in October – and we are expecting exactly the same for the fourth-generation Pixel 4 and its big-screen brother the Pixel 4 XL.

The main thing that we know, from the picture teaser, is that the rear camera will have a massive camera bump. As you can see it is a big square-shaped array that noticeably protrudes from the casing.

On analysis from experts, and those with beady eyes, it appears On  the bump houses two cameras. This is a major departure for the Google Pixel range which so far has made do with a single main camera on the rear to date. With other manufacturers now offering three or four cameras on their flagship models, this is hardly a great surprise.

The rear camera array also appears to include a flash and a pair of sensors.

Google Pixel 4: what we expect

One of the most interesting is that this phone will use a sophisticated form of gesture recognition - allowing you to use the phone without even having to touch it. So with a hand gesture you can silence the ringer, say. The tech behind this is a radar chip that Google has been working on under the codename Project Soli. How useful this Jedi-style communication with your personal communicator is the big question (should this particular rumor be true)

We will bring you more updates and rumors as soon as we hear anything interesting...

The best tripods for iPhones and smartphones