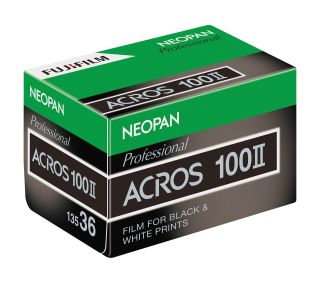 Fujifilm Neopan Acros 100 II is now back on sale, completing one of the most unexpected comebacks in the history of photography.

Fujifilm ceased the production of its last black-and-white film stock back in October 2018, and we all thought that the discontinuation of Neopan Acros 100 would mean the end of monochrome 35mm and roll films from the Japanese manufacturer.

However, after its shock announcement last June that it would be bringing out a new black-and-white film, Fujifilm Neopan Acros 100 II has been successfully relaunched – and it's available now in the US.

Acros 100 II is being touted as better than its predecessor, offering "unsurpassed resolution, fine grain and sharpness, with exceptional detail satisfying a broad range of shooting scenarios and exposures".

Fujifilm claims that the phoenix-from-the-ashes revival is all due to demand from younger photographers, who are discovering silver halide photography for the first time. Thank you, hipsters, for literally bringing Acros back by popular demand!

"As the demand for film rapidly decreased over the past decade and raw materials became difficult to obtain, it caused the company to discontinue marketing black and white film," read the Fujifilm announcement.

"Thanks to consumer feedback, particularly from millennials and Gen Zs, who have become the new film enthusiasts, the market is changing once again. To meet the needs of this new market, Fujifilm is reviving Acros II".

Killing off and then bringing back films is not entirely new phenomenon. Kodak has resurrected Ektachrome slide film and brought T-Max 3200 black and white film back into production in the last couple of years.

The ISO100 film stock is available in both 35mm 36-exposure canisters and 120 medium-format rolls with worldwide shipping from: