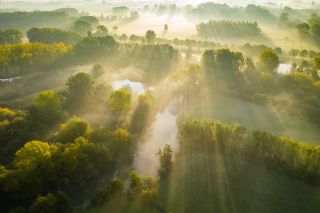 The winner of the Nature TTL Photographer of the Year 2020 has been crowned, with French photographer Florian Ledoux taking home the title with his incredible drone shot of seals taken over the ice floats in Antarctica.

The inaugural international competition attracted 7,000 entries from wildlife, landscape and macro photographers in 117 countries around the globe – and the standard of entries definitely marks the contest as one to watch in 2021.

“I am so excited to be chosen as the overall winner, I was never expecting this,” said Ledoux, who not only scooped the very first Nature TTL Photographer of the Year award, but also the £1,000 grand prize. “For me, it is very important to show the state of the Arctic and Antarctic regions, and to have an image from there win this award is important exposure."

Fittingly, the Frenchman took the opportunity to reinforce the use of camera drones in a responsible and ethical fashion when photographing wildlife.

“It is important that anyone inspired by this style of drone image understands the importance of wildlife and being ethical in your approach. Ensure that your drone does not spook animals or disturb them, and always conduct yourself within accordance of local regulations.”

Will Nicholls, founder of Nature TTL and a professional wildlife cameraman and photographer in his own right, was quick in his praise of the winning entry. “Florian’s image provides a unique angle that is not often seen in wildlife photography. The judges had a tough choice to make, but the detail and strong composition of the seals surrounded by the broken ice made it stand out from the crowd.”

Also taking home a cash prize was Robert Ferguson, who found himself £500 richer for winning the People's Choice Award with his fabulous image of a pelican struggling to swallow a fish.

Ferguson's photograph, along with the other category winners and a couple of our own favorites, can be seen below. The full gallery of commended and runner-up images, along with more information on the organization, can be found on the Nature TTL website.

"Aerial image taken in Tuscany in autumn light. Flock of sheep was hiding in the shade from the sun under the shadow of a tree."

"I was wearing a piece of waterproof overalls in the stream of Dabie Mountain, waiting to observe this Matrona basilaris (damselfly). Matrona basilaris is the king of the stream here. There is a male Matrona basilaris every 3 meters. They were waiting for the female to fly over its territory; the male chased away a male opponent and then stopped at the tip of the grass. Against the background of the sky, I discovered the connection between the lines of the grass and the subject. Nature itself is a simple painting."

"For the last 4-5 years I have seen that, at the end of every winter, farmers of this huge grassland generally burn the grass and reeds to clean the land for upcoming crops. When the fire spreads across the land, small insects start coming out. Then the brave Black Drongo starts capitalizing on such a moment by eating them and flying above the live fire. The birds usually sit on a branch fearlessly and watch the movements of the insects as the fire spreads into a new area, then it flies close to the fire for the catch. This is a full frame image, and the calmness of the Drongo reminds me of the Roman Emperor Nero."

"This is the Great white pelican (Pelecanus onocrotalus), struggling with a non-native fish. These wonderful birds are free to roam, but have established a large colony on one of the artificial islands in the old Jurong park in Singapore. I had set up my camera to take some portraits and watch their behavior, and noticed one particular bird that had caught one of the big fish from the pond.

"I watched, intrigued, as the bird swam in circles, dipping his bill, taking water, then raising his beak to attempt to swallow his large prey. But every time the fish extended its sharp spines on its fins - you can see it hooked on the beak here - and lodged itself firmly. This went on for over 20 minutes, with no sign of either party tiring. I was fascinated to see the intricate veins in the birds throat pouch, as the overcast day backlit the thin skin, and I had to move and crouch low to the ground to get the shot."

"This is a scene very close to one of the popular mountains of Iceland. While flying my drone to the mountain with my drone's camera pointed downward, I suddenly noticed this beautiful landscape with the blue river perfectly pop- ping against the black sand. The sun peeking through the clouds added more drama to the scene."

"I have observed and photographed damselflies on the ponds in my local park in London for years. Last summer, during the July heat- wave on an especially hot and muggy but overcast day, I went with the intention of trying to capture some shots using exposure compensation as I'd recently begun experimenting more with it. The damselflies were out in great numbers all over the surface of the water and due to the lack of direct sunlight I was able to shoot with a bit of positive compensation to leave the water white or near white. It then just became a question of looking for the most photogenic pairing and this group stood out due to the symmetry. This breeding behavior lasted exactly 1 day, as the next day I went back and the activity had already subsided for another year."