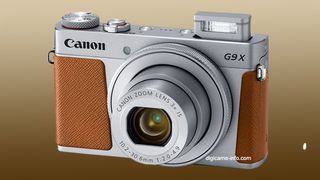 While it would be easy to become overwhelmed by the sheer volume of Canon rumors that have been surfacing recently, we're doing our best to keep our heads above water and continue bringing you all the latest camera goss'. No, please, no need to thank us for our service. The latest rumor to hit the internet is that the Canon PowerShot G9 X Mark III could be announced soon. This Canon compact camera would be a follow-up to the Canon PowerShot G9 X Mark II.

When compared with heavyweights such as the Canon EOS-1D X Mark III and the Canon EOS R5, the Canon PowerShot G9 X Mark III might seem like small potatoes, but there's still plenty to unpack. However, remember that these specifications are merely rumors, so take them with a pinch of salt.

Sporting a 20.1MP sensor, the Canon PowerShot G9 X Mark III doesn't seem to have had any upgrade in the megapixel department. However, as reported by rumor website Canon Watch, the processor has been updated from the Mark II's DIGIC 7 processor to the DIGIC 8.

These specifications all sound interesting, but we'll have to wait until the PowerShot G9 X Mark III is officially announced for more information.