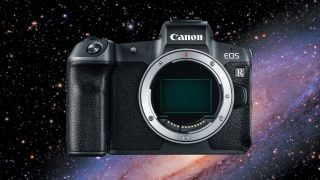 UPDATE: The Canon EOS Ra has now been leaked, by none other than Canon itself. The full story is here.

ORIGINAL STORY: When it comes to space tech, what's old is new. Star Trek: Picard is bringing Patrick Stewart back to the bridge, Star Wars Episode IX is bringing back the Skywalker legacy, and now Canon is bringing back a dedicated astrophotography camera.

Rumors started swirling last week that the company would release a new version of the EOS R this year – but not a pro model, or a hi-res model, or even a more amateur model.

"It is a 'head scratcher', and not at all what anyone is expecting," wrote Canon Rumors. "What sort of niche market could benefit the EOS R?"

As it turns out, it's a niche market that Canon has catered to before; yesterday we started hearing reports that the company is planning to release a Canon EOS R dedicated to astrophotography.

Which might seem bizarre, but it seems no small coincidence that the news comes so close after the recent patent for Canon Moon Shooting Mode to enable easier shooting of celestial bodies.

All of this is actually familiar territory for the manufacturer; the Canon EOS 20Da was its first ever dedicated astro camera, released back in 2005, and its most recent stargazer was 2010's Canon EOS 60Da – neither of which were full-frame systems.

• Read more: How to shoot astrophotography

The purported Canon EOS Ra, then, would be the company's first full-frame astrophotography camera – and its first mirrorless one, too.

Like the EOS 60Da before it, the EOS Ra will likely be almost identical to its non-astro counterpart; the key difference will be in the sensor.

The IR cut filter in the 60Da was recalibrated to achieve a hydrogen-alpha light transparency that's three times higher than the standard 60D, enabling "much clearer images of diffuse nebulae which exhibit a reddish tone when viewed without filtration" according to B&H.

With the photography community – or at least its vocal online contingent – baying for a professional EOS R, it does seem curious for Canon to release such a niche product instead.

Then again, a product with the same chassis and only a slightly modified (rather than completely redesigned) sensor seems like a canny use of inventory – especially if, as the two previous models suggest, there's a market appetite for an astro camera.