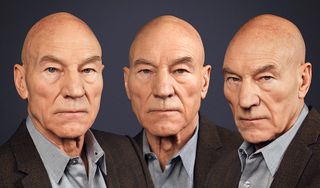 Most famous for his turns as Captain Jean-Luc Picard on Star Trek: The Next Generation and Professor X in the X-Men movies, Stewart has become a pop culture icon. However, as a staple of the Royal Shakespeare Company for 16 years, his career is steeped in tradition – so it's fitting that he was asked to sit for a portrait in the style of a classical baroque portrait.

Lewis was commissioned to photograph the star in New York, in the triple portrait style of van Dyck's famed oil painting 'Charles I in Three Positions', which is currently in the Royal Collection and was the basis for Italian sculptor Gian Lorenzo Bernini's marble bust of the monarch.

The historic work by England's leading court painter, created in 1635 or 1636, depicts the King of England in three positions: full profile from the left, face-on, and three-quarter profile from the right.

Lewis' interpretation of the Stuart-era painting captures Stewart in three-quarter profile from both sides, with the photographer directing the actor to give a variety of theatrical and more serious expressions.

“What emerged from the session was a complex and vigorous character, embodied by energy and animation; a side of Sir Patrick that I thoroughly enjoyed watching unfold in front of my lens,” said Lewis, who found the unique sitting challenging but was satisfied with his presentation of the star "in a coherent state of mind".

Ten limited edition prints of the portrait, each individually numbered and signed, will be issued by the photographer, costing $279. More information about 'Sir Patrick Stewart in Three Positions' can be found on Lewis' website.