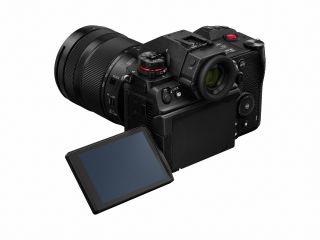 On August 27, Nikon announced that it was bringing officially supported RAW video output to the Z6 and Z7, making them the first consumer cameras to have this revolutionary feature. Then, just over 24 hours later, Atomos sent out a brief press release to announce that it was co-developing RAW output for the Lumix S1H with Panasonic.

Jeromy Young, Atomos CEO, says, "We are very proud of continuing to develop new ground-breaking technology with a company of the caliber of Panasonic. We are both highly committed to the democratization of filmmaking for creators, and the ability to transmit RAW over HDMI from the S1H to a Ninja V is a major leap forward in this endeavor."

The announcement of the Panasonic S1H's full specs was already exciting enough - what with 6K internal recording, 10-bit 60p 4K recording and over 14 stops of dynamic range. However, RAW video output will truly make the S1H a videography heavyweight.

At Panasonic's LA event for the announcement of the S1H's full specs, Panasonic said, "The leading brand of external monitor-recorders is definitely Atomos. Both companies have a very good relationship and we have been providing 4:2:2 10bit HDMI output recording for the Lumix GH series for years. We are very proud to be developing RAW output via HDMI with Atomos for the S1H.”

This announcement is certainly very exciting, but with the S1H on sale from the end of September, when will this feature become available?

Well, while Nikon hasn't given a specific date for the arrival of RAW video output for the Z6 and Z7, it has said that it'll materialize later this year. In contrast, we don't appear to have any timeframe for when RAW video will be available for the S1H. This announcement only says that the two companies are co-developing the feature, not that it will be available any time soon.

We also wonder how Apple's legal petition against Red for its patent for RAW video recording will affect this. Our understanding is that anyone who wishes to use RAW video output in their technology have to pay Red a (likely hefty) fee for the pleasure. This seems to be, at least partially, the reason why RAW video output has been so slow to come to consumer cameras.

While Panasonic haven't announced which RAW video codec it'll be using, Nikon has already stated that it'll be using Apple's ProRes RAW format. If Apple's legal petition fails, what will happen with its RAW codec - and will Nikon's plans of RAW video output be affected?

Either way, we're definitely excited to see plans in motion for RAW video output to come to consumer cameras - and we'll be sure to keep you updated on any further developments.