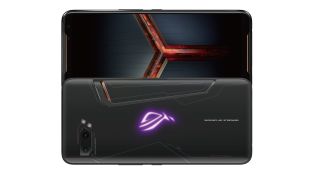 The Asus Ultimate Edition ROG Phone II has been announced at IFA 2019, loaded up with faster mobile internet than the vanilla ROG Phone 2 - 2Gbps vs 1.2Gbps, as well as double the storage, packing a monstrous 1TB under the hood. Also available in a more demure matte black finish, it looks like the most powerful gaming phone on the block has just leveled up in terms of both power and style.

The original ROG Phone was a champion when it came to delivering gaming clout without sacrificing on imaging capabilities, shipping with a camera that outperformed all its gaming phone competition, from Black Shark through to Razer and later, Red.

Now, Asus has loaded up the ROG Phone 2 with an enhanced camera array identical to that found on the excellent Asus Zenfone 6. Featuring one wide and one ultra-wide module, the primary camera is the popular 48MP IMX 586 capable of 4K capture at up to 60fps. This time around, the primary camera doesn’t flip out to double up as the selfie camera, so the ROG Phone 2 has a dedicated 24MP selfie snapper. Asus claims it’s in the perfect place for live streaming gamers - Twitch fans rejoice - and the phone’s been kitted out with four microphones for advanced noise cancelling.

ROG Phone 2: Everything else

Claiming to be the most powerful gaming phone around when it launched in July, the ROG Phone 2 is the first to feature Qualcomm’s Snapdragon 855 Plus chipset, which delivers a 7% increase in performance compared to the standard 855. It’s also loaded up with a triple cooling system, shipping with a clip-on fan to keep the temperature down and gaming performance up.

As for the ROG Phone 2’s display, it’s a world first. With a 120Hz refresh rate coupled with HDR10 support and AMOLED screen tech. In turn, it combines quality with incredible smoothness to create a 1ms refresh rate. It isn’t just fast to look at, it’s fast to the touch, with a 240hz touch refresh rate as well. Packing more milliamp-hours than anything else on the scene, the phone’s 6000mAh battery outperforms the Samsung Galaxy S10 by roughly 100% when gaming, according to Asus, and with fast charging, you can power up 5000mAh in just one-hour - easily enough power to get even demanding users through a full day.

If you don’t need the Ultimate Edition, you can pre-order the Elite ROG Phone 2 with 512GB storage and 1.2Gbps LTE speeds for €899 right now. As for when you’ll actually be able to get your hands on it, the phone is expected to ship by the end of September. As for the Matte Black Ultimate Edition loaded up with 1TB storage and up to 2Gbps LTE speeds, that will be available in Q4, with no pre-order date confirmed just yet.