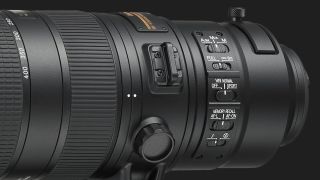 Sure, it's a lens that most of us don't need, and will never be able to afford – but that's not really the point. Its announcement bolsters Nikon's commitment to its professional user base, and gives sports and wildlife photographers a new option for their shooting, with the built-in teleconverter – a first for Nikon – enhancing its appeal even further.

And of course, those without a five-figure budget to spare, or simply left broke after splashing out on a D850 body, will be able to rent the lens at some point to get a better idea of its capabilites.

The lens is due in March, so while we wait for it to arrive, we've put together an in-depth look at everything the lens offers.

As an FX-format lens, using this Nikkor on a full-frame body will provide you with an effective 180-400mm focal range as standard.

The integration of a 1.4x teleconverter, however, a move that mirrors one Canon made a few years ago with its EF 200-400mm f/4L IS USM Extender 1.4x, means that you can increase this to an effective 252-560mm at the flick of a switch towards the rear of the lens.

As with other 1.4x teleconverters, this comes with a one-stop penalty with regards to maximum aperture. So, whereas you'll normally have f/4 at your disposal, you'll only have a maximum f/5.6 with the teleconverter enabled.

This might not sound very fast, but it is constant throughout the zoom range (ie available at all focal lengths) and it should still be possible to get good separation between subject and background here.

The lens's minimum aperture is f/32 as standard but this narrows down to f/45 when using the teleconverter. The chance of you needing, or wanting, to use such a small aperture, however, is on the slim side.

This beastly lens contains a mammoth 27 elements on the inside, and these are arranged over 19 separate groups, with the teleconverter alone comprising 8 elements over 5 groups.

This configuration includes eight Extra-Low Dispersion (ED) elements, which are designed to help control chromatic aberration and keep images sharp, as well as  a single fluorite element. Fluorite also helps to control chromatic aberration (and, according to Nikon, is particularly useful in longer lenses), and, as it can take the place of a number of individual element, means weight can be keep weight down too.

Nikon has also primed the first element with a protective fluorine coating, which is designed to repel water, dust and dirt, and make any of these easier to wipe off from its surface.

To further help maintain image quality, Nikon has employed its Nano-Crystal Coat (above), which it says "virtually eliminates" reflections inside the lens, and helps to keep ghosting and flare from affecting images. To further banish these, Super Integrated Coatings have also been used.

The result of all this is perhaps best summed up by Nikon's statement that images will be kept sharp at all focal lengths, even at wider apertures.

It's not light, nor is it cheap

It promises to keep things stable

We'd be fairly surprised to see a lens of this sort not offering image stabilisation of any kind, so it's just as well than Nikon has blessed it with its longstanding Vibration Reduction feature.

This promises up to four stops of usable shutter speed over using such a lens unstabilised. So, whereas you should normally expect to use a minimum shutter speed of around 1/400sec at the telephoto end, with the VR system enabled, you should be able to safely drop down to 1/25sec or so.

Naturally you may not wish to use such a slow shutter speed for moving subjects, but it's good to know you can get away with such a shutter speed when you need to.

Vibration Reduction is called upon through a switch on the lens barrel, and this is offered in two flavours. Normal is designed for everyday use, while Sport is intended to reliably track fast-moving subjects and provide a more stable image through the viewfinder.

You get a removable tripod collar thrown in

Unless you're built like Eddie Hall, there's a good chance you'll be using this lens on a tripod, and a ring for this has been provided.

This tripod ring, which incorporates a new ball-bearing mechanism, can be flipped up and out of the way, or removed completely if you don't need it, but it should help you to mount your setup on a tripod far closer to the centre of gravity than if you were to do so through your camera's tripod bush.

Nikon has chosen to use magnesium alloy for the body of the lens, and every movable part of the barrel is said to be protected against the elements.

We would expect this for a lens of its calibre (and price), and it means that those using weather-resistant bodies should be able to use such a combination in confidence.

The focusing system is sound and comprehensive in control

You can focus down to 2m away from the subject (this distance measured from the subject to the sensor) and the barrel includes a focused-distance window (pictured below) that shows where the lens is focused in both feet and metres. A depth-of-field scale isn't provided, but then we wouldn't necessarily expect one on such an optic.

If you know you won't need to focus closely, you can also restrict the focusing range to between 6m away and infinity. This is useful as it prevents hunting, where the lens keeps moving back and forth throughout a portion of the focusing range that's well outside where the photographer needs to focus, which in turn helps you to get the shot you want with less delay.

The three-position focus switch allows you to alternate between A/M, M/A and M positions. M simply places the lens into manual focus operation, but the differences between the other two may not be obvious.

Both modes allow you to override autofocus with the manual-focusing ring whenever you feel you need to, but the focusing ring is less sensitive to any changes in movements when set to A/M than it is when set to M/A.

As with all AF-S lenses, a Silent Wave Motor is used to help keep autofocus swift and silent. Focus operation is internal too, which means that the lens does not change focal length as you focus to different distances, which, in turn, keeps the centre of gravity fairly constant.

There's also a Memory Recall feature that allows you to recall pre-determined focusing distances, and it beeps to indicate that it is using this (and also when you save a focus distance). Need to be more discreet? A small switch beneath this allows you to mute this sound.

Nikon is also said to have refined the AF tracking algorithm that controls the motor drive in order to enhance performance when the tracking moving subjects. Furthermore, a forthcoming firmware update will allow users of Nikon's D5 (above), D850 and D500 – ie the three cameras that employ the company's latest 153-point AF system – to have the outer rows of AF points cross type for enhanced sensitivity.

What else do you need to know?

The lens has nine diaphragm blades, which are said to create a rounded opening. This should help to keep bokeh nice and smooth.

In place of the mechanical linkage levers that are used on many other lenses, an electromagnetic diaphragm mechanism has been used to help control the size of the diaphragm. This is useful when you're shooting continuously and the lens needs to adjust this in order to maintain the same exposure – and it's also what the E in the lens's name standard for.

The minimum reproduction ratio is 0.25x. This increases to 0.36x when using the teleconverter at 560mm. The lens also accepts 40.5mm filters, which are slipped in towards the rear of the lens.

What's in the box?

Anyone lucky enough to get their hands on one of these lenses will find Nikon hasn't skimped on useful extras in the box.

In addition to front and rear lens caps, you get a slip-on front lens cap (pictured below), a lens hood, slip-in filter holder, screw-on neutral-colour filter, strap and a lens case.

You won't have to wait long

The lens will be available from 8 March – so start saving.