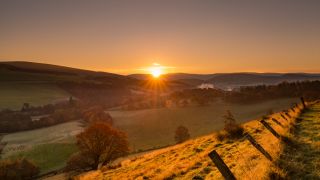 Time-lapse photography is the art of taking single images and combining them to create a video that shows the movement of the environment around you.

This could be the movement of clouds, stars or even the hustle and bustle of a busy city. The results can show how a scene can change dramatically over time, perhaps between different types of weather or from one season to the next. I find that time-lapse photography can tell a different story about the landscapes around us that a single image may not be able to tell.

Now, if we apply the same way of thinking to photography, all we have to do is take a certain number of images, one after the other, over a period of time. When played at, say, 25 frames per second, we will have just created a time-lapse video.

When planning your shoot you need to consider the movement of the subject before anything else.

Are you going to see much of a difference over time or will everything stay the same? Planning your shot and picking a subject in a scene that changes over time will make for a more interesting result. This could be anything like the sun setting, traffic moving in a city or a change in weather.

Remember that photographic rules still apply to time-lapse photography, so make sure you don’t overlook composition. Consider framing your shot using the rule of thirds and try to look for interesting leading lines – and always make sure there are no distracting elements in your shot.

You need to plan your shoot just like you would for any stills photography shoot. Once you’ve settled on your location, check the weather and make a note of when the sun sets and rises. I use an iPhone app called Photo Pills, which shows me the path of the sun and also where the Milky Way will be during the night. I will always know in my head the shot that I’m after before I reach the location, and this enables me to concentrate on the shot instead of running around not knowing what to shoot. When shooting a time-lapse video, the shots can take a long time to make due to the number of images needed, so planning is crucial if you’re to get your shots you need in the limited time you may have.

Any camera will do as long as it can shoot in Manual mode.

Any lens will be fine, but it really depends on what you’re shooting. I tend to work with lenses from 14mm to 200mm.

What you want is a strong tripod that isn’t going to blow away.

You need an intervalometer so that your camera can take shots continuously without you touching it. Many cameras now have these built into them.

Setting up the shot

When setting up your shot there are a number of things to remember so that you don’t have a ruined shoot.

First, you need to consider how long you want the camera to be running for. Depending on the frame rate of your final video, always remember that 24-25 shots equates to a single second of video. So, if you want a 20-second video, you'll need to take around 500 images.

You also need to think about the interval between each frame, which is the gap between every shot taken. I judge the interval time based on how quickly subjects are moving in the scene. If I’m photographing fast-moving clouds, for example, I will usually have an interval of around 2-3 seconds. If I'm photographing the night sky, however, it could be around 30 seconds.

It's really up to you, but through experimentation you should be able to understand what works best for a particular scene or subject. I generally have an interval of anywhere between 2-30 seconds depending on what I’m shooting.

Click below to see how to shoot and edit your time-lapse images.