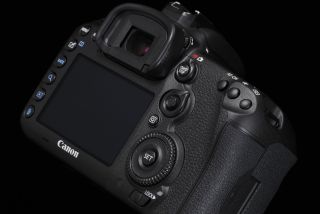 The second-generation Canon EOS 7D Mark II DSLR shows its semi-professional status as much in its rapid response times and list of features as long as your arm as it does in its sturdy, weather-resistant build.

Granted, it offers an APS-C sensor rather than a full-frame one, but this is a bonus for the target audience, one that prioritizes extra reach for its lenses over the benefits of full-frame shooting.

Its traditional optical viewfinder, which offers a 100% field of view, is big and bright enough for eye-level image composition, even when working in dim lighting conditions. You also get a very capable 65-point AF system to provide pin-sharp focus no matter where your subject wanders in the frame, and battery life is respectable too, giving you around 670 shots per charge.

Given that the older EOS 7D was popular with fledgling filmmakers, it comes as no surprise that Canon has given things a boost here. Full HD capture is available at 60p, and we also get a microphone input for more professional sound via an optional external microphone, plus a headphone jack is provided for audio monitoring. Further improvements come in the form of Dual Pixel AF – a lifesaver for fast and smooth autofocus performance in both live view and video – together with built-in GPS and compatibility with a Wi-Fi unit.

Handling and access to key features feels familiar, though the joystick used to scroll through menu settings on the rear of the EOS 7D Mark II is a little small and can be a tad slippery in the heat of the action.

We do, however, love the fact that the camera has a top-plate LCD for displaying key settings at a glance, plus dedicated small buttons around its screen for altering choices with a spin of an adjacent control wheel. We also get a 3in LCD screen on the back plate although, unlike an increasing number of rivals, it can't be physically adjusted in any way.

Despite some tweaks here and there, it appears that Canon has taken the “if it ain’t broke don’t fix it” approach, following in the footsteps of the justifiably popular EOS 7D. In short, if you don’t need a full-frame DSLR, the second iteration of the EOS 7D is likely to be towards the top of your shortlist.