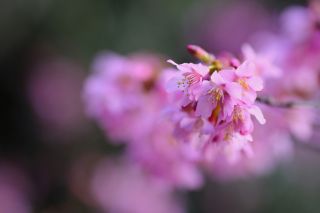 Many photographers turn to full-frame cameras and fast lenses to get shallow depth of field, but what if you only have a smartphone or a basic compact?

While it certainly helps to have a camera with a large sensor and a wide-aperture lens when trying to achieve shallow depth of field, it’s still possible to achieve these same kinds of effects to some degree on cheaper compacts and cameraphones, without resorting to digital manipulation.

The first thing you should do is to use as wide an aperture as possible, but basic cameras and smartphones may not give you control over this. Even if they do, you may still find that it's not enough to provide you with the kinds of results you're after.

Get close to your subject

If you’ve ever used a macro lens you may already appreciate how focusing closely on a subject affects depth of field.

Whereas, for example, a 90mm lens used conventionally for a portrait will may give shallow depth of field at a given aperture, a macro lens of the same focal length will produce only a very fine sliver of sharpness when used to shoot a subject only a few centimetres away at the same aperture.

This isn’t limited to macro lenses, however, just that they are designed to focus much closer than conventional optics, so the effect is much easier to appreciate when using them.

Modern smartphones and tablets can capture subjects just a few centimetres away, so even with their smaller sensors they can render blurred backgrounds.

Compact cameras may not be able to focus down to the same distances at conventional settings, which leads us on to the next step…

Use the macro mode

The majority of compact cameras offer a macro button or setting, which is usually marked by an icon of a flower.

When set to this mode the camera is instructed to focus closer than usual to a subject, perhaps just 1cm away or so. With focus so close, more distant subjects are forced into blur as they lie so much further away from the zone where you're actually focusing.

Most cameras will require you to switch to the wideangle setting when using the macro mode, as they will not be able to focus this closely when using longer focal lengths.

Bear in mind that capturing images up close with a wideangle focal length could lead to your subject being distorted, so either watch this as you shoot and adjust your position or try to rectify this using some kind of distortion correction.

Separate the background as much as you can

Whenever you focus on a subject, you're letting the camera know which part of the scene is the priority. However, the camera will not only focus on the subject itself, but will extend focus to a zone behind and in front of the subject too, which is partly determined by the aperture you use.

This means that anything in the same area will also be rendered in focus, gradually becoming more blurred as you get further away from wherever you’ve chosen to focus. So it follows that background (or foreground) details further away from the subject will be blurred to a greater extent than those closer to it.

Bear this in mind when it comes to framing your shot, moving anything that may distract from the subject out of the way if possible and changing your position so that the background details are as far away as possible.