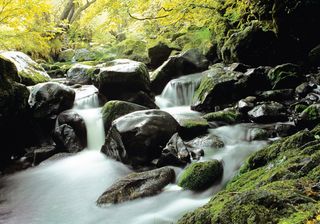 What is depth of field?

Depth of ﬁeld is a measure of how much of a picture is in focus.

A lens can only precisely focus on one plane at a time. However, there’s always a certain amount of the picture in front of, and behind, this plane that also appears to be sharp. It is this zone of ‘acceptable sharpness’ that is the depth of ﬁeld.

Anything outside of this zone appears blurred or out of focus. The amount of depth of ﬁeld varies from picture to picture, depending on a number of different factors.

How does depth of field help to improve my shots?

Depth of ﬁeld is one of the most important creative controls available to the photographer. By learning how to control it, you can ensure that everything from your feet to the horizon appears pin sharp.

Alternatively, you can make sure that depth of ﬁeld is restricted to such an extent that parts of your picture are thrown anonymously out of focus, for artistic effect or to hide distracting features in a scene.

It’s not just one factor that affects the amount of depth of ﬁeld that you end up with, but several working in tandem. Some of these factors, however, are much easier for photographers to control than the others.

What’s the easiest way  to control depth of ﬁeld?

The aperture setting you use is the simplest and most straightforward way of altering depth of ﬁeld because you can do this without changing equipment or shooting position.

The smaller the aperture you set, the more depth of ﬁeld you get and the more of your shot appears in focus. So on a typical zoom, a narrow aperture of f/22 will keep more of the shot in focus than a wider aperture of f/5.6.

The aperture can easily be altered by the photographer in a number of exposure modes, including Shutter Priority and Aperture Priority.

So can you set the depth of ﬁeld precisely for every shot? Yes and no. You can increase and decrease the amount of depth of ﬁeld by adjusting the aperture.

More importantly, you only have a limited range of apertures, so often you can’t set the zone of sharpness precisely to suit your needs. But using the other factors can give you more control.

Significant factors in depth of field

The subject distance (or more accurately, the distance the lens is focused at) also has its role; the closer the focused distance, the less depth of ﬁeld you get.

Read more: how to get depth of field effects with any camera

How much depth of field do you get?

Often the difference will be dramatic. When shooting with a wide-angle lens and a small aperture, there will typically be a metre of depth of ﬁeld your side of the focused point, but everything behind as far as the eye can see will also be sharp.

With macro subjects, depth of ﬁeld at very close distances is evenly spread in front of and behind the focus point (but perhaps just a millimetre or two in each direction).

How to maximise depth of ﬁeld

Changing the focal length of the lens you’re using creates dramatic changes in depth of field. Here, three portraits are taken with a mid-range DSLR focused at 4.5m (15ft) and set to an aperture of f/8.

First, set a narrow aperture (such as f/22). It may be necessary to use a tripod, or to increase the ISO to make small apertures feasible in anything but bright light.

Next, use the widest lens you can get away with for the subject, and stand as far away as possible. Finally, focus on a point about a third of the way up the frame to ensure as much of the shot as possible is sharp.

How to minimise depth of ﬁeld and maximise blur

Use the longest lens you can get away with, and/or get as close to the subject as possible. Now set the maximum aperture available on your lens.

‘Fast’ lenses with wider-than-average maximum apertures are much better at this effect. Cameras that come with larger sensors also offer more restricted depth of ﬁeld than those with smaller sensors.