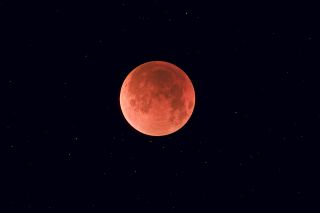 A total lunar eclipse will occur this weekend on the night of January 20-21, and it will be visible to all photographers in the UK and throughout the USA – clear skies allowing.

The spectacle will see the moon turn an orangey, reddish colour for over an hour, which can make for a unique photograph.

A total lunar eclipse is not to be confused with a total solar eclipse, a much more dramatic and short-lived event that occurred in 2017 in the US. While a challenging subject to photograph, a total lunar eclipse as far easier to capture using any camera equipped with a decent zoom capability.

Here's everything you need to know to capture the most dramatic 'blood moon' of your lifetime.

What is a total lunar eclipse?

A total lunar eclipse occurs when the moon moves into the darkest part of the Earth's shadow projected into space. It can only occur during a full moon, where Earth is precisely between the sun and our satellite.

Although a full moon occurs every 29 days, the moon has an inclined and rather wobbly orbit around Earth, which means it very rarely passes through the Earth's shadow. When it does pass through some of the shadow, a partial lunar eclipse is the result.

Why does the moon go red?

As it begins to enter the dark shadow of Earth, one edge of the moon begins to look pinky-orangey-brown, changing to red as the event peaks. Once it has entered into that darkest zone of the shadow, it’s what's called totality, where sunlight is being bent through the Earth’s atmosphere and on to the moon.

So, much like a sunset is red because the light that’s entering your eyes is travelling through a lot of the Earth's atmosphere, so the light projected onto the lunar surface is also red. The physics is much the same.

Do I need special equipment?

Unlike a total solar eclipse, for which special glasses (for humans) and ND filters (for cameras) are essential for viewing the partial phases, the entire spectacle of a total lunar eclipse is very easy on the eyes. No special equipment is needed, just a zoom lens or a telescope.

Where is the blood moon visible from?

The total lunar eclipse that will occur on 21 January 2019 will be visible from the UK, Europe, Africa and Asia. So will you get a good view?

From an astronomical perspective, it's best if the moon enters the Earth's shadow while it’s high in the sky from where you are observing from. That way, you get to see the whole event, including the partial phase leading up to totality, totality itself, and the following partial phase.

What time will the blood moon be visible from the UK?

UK photographers have a great chance – and a lot of time – to get a special shot. If you want to take images of a full moon that’s far less bright than usual, go outside at 2.30am on 21 January 2019 as the moon enters Earth’s outer shadow. However, if you just want to capture the ‘blood moon’, the key time to be outside is 4.40am. The moon will be completely red at around 5.10am (a moment called totality), and will have lost its colour by 5.45am.

You can check out the exact times at www.timeanddate.com/eclipse

What time will the blood moon be visible in America?

The prospects in North America are also good... In Los Angeles the eclipse will start on the night of Sunday 20 January, with the Partial Eclipse starting at 9.33pm. The Blood Moon will be visible from 8.41pm until 9.43am.

In New York the eclipse will also start on the night of 20 January, with the Partial Eclipse starting at 10.33pm. The Blood Moon will be visible from 11.41pm until 12.43am (so it will start on the Sunday, and end on the Monday).

You can check out the exact times for your precise location at www.timeanddate.com/eclipse

How to photograph a total lunar eclipse

Given clear skies – which certainly isn't inevitable – photographing a total lunar eclipse is not technically difficult.

The first thing you need is to check whereabouts in the sky the moon will appear, if the clouds stay out of the way. You can use apps like PhotoPills and The Photographer's Ephemeris (TPE) to precisely plan your shot; try to get the moon rising between buildings or trees, and consider finding a pond or lake for reflections.

Read more: 15 of the best photo apps for iOS and Android

It's also going to suppress the brightness of the moon quite substantially, so it should be easy enough to photograph within an interesting composition. It's quite rare to have the chance to photograph a blood moon within a landscape; usually it's photographed high in the sky against a black background.

While any camera with a wide-angle lens can be used to capture the landscape, the redness of the moon will be better captured by using a zoom lens, preferably one over 200mm (and ideally 400mm or more).

That your camera must be placed on a tripod is obvious, but there are a few other things to think about that are unique to this total lunar eclipse. Most online tutorials are tailored to photographing lunar totality when it's against a dark backdrop, but this one will be during the blue hour and within a landscape.

Shutter speed is key factor. Since the the moon orbits Earth at a speed of 2,288mph and the Earth is rotating at about 600mph at the UK – it rotates faster at the surface the closer you are to the equator – the biggest problem is avoiding a blurry image. That means you must always use a high shutter speed to get sufficient sharpness.

To avoid blur, never use a shutter speed slower than 1/100sec. The sensitivity can stay within ISO 200 to 800, but at the total eclipse stage the moon still going to be red, and by that time, the sky will be dark, so you could push your ISO further.

While the aperture will need to be narrower than usual for a lunar totality it should be wide open at f/4 (or f/2.8 if your lens can cope with that). It’s hard to be precise since the brightness of the totally eclipsed moon is a mystery until it appears, so just keep the camera in its Manual exposure mode and experiment with various apertures and ISO settings.

When is the next total lunar eclipse?

After the night of 20 January, the next total lunar eclipse visible will be on 6 May 2021, but that won't be so widely visible in the USA, and will not be visible at all in the UK (Australia will get one of the best views).

Jamie Carter is the editor of WhenIsTheNextEclipse.com

• Astrophotography: How-to guides, tips and videos on getting your best shots

• Astrophotography tools: the best camera, lenses and gear for shooting the night sky