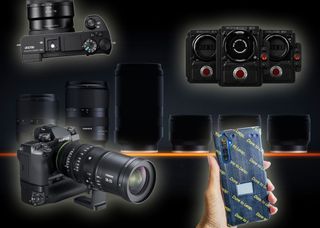 We've officially hit the quiet period of the slow summer season, though business looks likely to pick up next week with a series of camera announcements.

It looks incredibly likely that Sony is readying two new bodies for reveal towards the end of next week, and looking a little further beyond that Fujifilm is also working on a new camera announcement.

Tamron is teasing a lineup of new lenses, too, which has got us all playing an educated guessing game.

As far as what is actually here and now, the latest 64MP camera phone from Realme has been in journalists' hands – and the shiny new Samsung sensor has left them feeling more than a little nonplussed.

Even more nonplussed is Red, which is currently fending off a lawsuit from Apple over one of its video codecs, which could have serious ramifications for videographers using their smartphones and Hollywood hear alike…

As we speculate about the long-awaited arrival of a new entry-level Sony APS-C mirrorless camera to replace the aging A6000 (believed to be the Sony A7000), signs have surfaced that Sony may well have a A6000 successor waiting in the wings – albeit not with the model number you might expect.

We may well see not one but two new APS-C Sony cameras revealed next week, namely the A6200 and A6700. If correct, the A6200 would be positioned below the A6400 in terms of specs, performance, and presumably price.

Whether the new camera would oust the old A6000 to become the lowest rung on the A6x00 ladder is still unknown, but knowing Sony's track record, we'd speculate that the venerable A6000 may well live on, possibly receiving yet another price cut…

Read more: Not one but two new Sony APS-C cameras to launch next week?

Is the Fujifilm X-H2 ready to launch?

Fujifilm appears to have registered an as-yet unidentified new camera, model FF190001. We believe it's not a new and updated X-Pro 3 model, but another new camera to arrive in October 2019 – and we really hope it's the new Fujifilm X-H2.

Fujifilm buyers at the enthusiast/professional end of the market have a quandary. The Fujifilm X-H1 is the camera that Fujifilm has made specifically for this kind of user, with a big, meaty body, in-body stabilization and a top-mounted status display. However, the company then launched the X-T3 with a higher resolution sensor, faster processing, better autofocus and better video.

The X-H1 still has physical advantages, but technologically the X-T3 puts it in the shade. So we think it's a matter of when, not if, there's a new Fujifilm X-H2 – and this is what we predict its specifications and features will be…

Read more: Is this the new Fujifilm camera? This is what the Fujifilm X-H2 could look like

Tamron has released a tantalizing sneak peak video of four new mirrorless lenses – and in response, countless netizens have dutifully donned their Sherlock Holmes deerstalkers and are trying to decipher what each one of these mysterious lenses could be.

The video, which you can view below, begins by showing the two lenses in Tamron's current Sony E-mount lineup: the 17-28mm f/2.8 and the 28-75mm f/2.8. It then reveals the silhouettes of four new lenses, one of which looks to be a telephoto zoom and the others seem like small and light primes.

The enigmatic zoom has particularly piqued the interest of Tamron users. Considering the past two Sony E-mount lenses amount to a focal range from 17-75mm, many are speculating that this new potential zoom will be a 70-200mm (or similar). They're also saying that it'll likely be f/2.8 to complete the zoom lens trilogy…

Read more: Tamron to release four new mirrorless lenses – but what will they be?

Touted as the world's first 64MP camera phone, the Realme XT looks set to be the first one to market – unless a rival manufacturer does something suitably punk rock and releases their own before September ends. (Keep an eye on our new smartphone news and rumors hub to see who's winning that particular race…)

The Realme XT makes use of the shiny new 64MP Samsung Isocell Bright GW1 sensor for its primary camera, and also incorporates an f/2.4 macro camera, an 8MP f/2.2 118° wide-angle camera, along with a telephoto affair that offers 2x zoom – but not optically.

However, GSM Arena has already been hands on with the device – and it came away with some interesting observations that don't paint an entirely optimistic picture of the new phone… or Samsung's new sensor.

"The 64MP unit has a 1/1.72" type sensor and a pixel size of 0.8μm and works similarly to its 48MP counterpart… The sensor does have a demosaic algorithm for full 64MP shots, but there's so much interpolation going on there that you get very limited extra detail, if any…"

Apple vs Red, and the consequences for video

In May of this year, Apple filed a legal petition against one of Red Digital Cinema's key patents for the 'Redcode' codec. Enlisting the help of British imaging scientist Cliff Reader, Apple argued that the patent for this codec failed to describe sufficiently novel technology.

However, on August 15 Red came out swinging with responses from company President Jarrad Land, Founder Jim Jannard and the inventor of Redcode, Graeme Nattress. Each of the Red representatives counter that the technology described in the patent was indeed novel – and that it helped change the industry.

So, what exactly is Redcode? And why is it so important?

Well, inventor Nattress describes it best: "I first met Mr Jim Hannard in December of 2005. At that meeting, we discussed his desire to create the first ever digital motion picture camera that could record compressed digital motion video at cinema quality levels, including 4K…"

Read more: Apple's petition against Red could have serious consequences for Hollywood