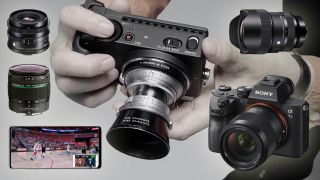 What a week it's been for mirrorless cameras, with a brand new modular body and a whole slew of lenses for these newfangled picture boxes that eschew the reflex mirror.

On top of that, camera phones have taken the sporting world by storm as the week witnessed the first ever sports broadcast shot entirely using smartphones!

Elsewhere, Canon might just have solved the age old lost lens cap problem, while full-frame 8K cameras have hit a bump in the road and won't be here until 2021 at the earliest… Here are the five biggest camera news stories of the week!

Sigma has been teasing its new full frame mirrorless camera for a while, but the official announcement is a bolt from the blue.

Called the Sigma fp, the new camera will feature a 24.6-megapixel sensor and it will use a classic Bayer color filter array, not Sigma's own multi-layer Foveon technology.

Designed to be the smallest and lightest full frame mirrorless camera ever, it will take interchangeable L-Mount lenses and is designed to break the pattern of current camera design.

Sigma's idea is "how a camera can be", not conforming to current categories and hierarchies, and there's already a list of 9 Sigma fp accessories to expand and adapt the camera for use with different equipment…

There were a litany of new lenses announced this week, offering something for almost every focal length imaginable – including a very old school DSLR lens.

The latter stole a bit of thunder from the long-rumored Sony FE 35mm f/1.8 lens, which was finally made official this week.

Canon has its own exciting RF lens, too, in the shape of the Canon RF 24-240mm f/4-6.3 IS USM – an ultra-compact optic that pairs perfectly with the EOS RP.

And finally, Ricoh kept things old school with the HD-Pentax DA fisheye 10-17mm F3.5-4.5 ED – a practically vintage fisheye lens for K-mount cameras that gets an update with new coatings.

The race for consumer 8K is a high profile one, but it looks like Sharp is the only company who will deliver it in 2019 – Canon, Sony and Nikon will all miss the 2020 Olympics, and Panasonic won't have it ready until the 2022 Olympics.

Despite Panasonic's announced intention to release an 8K camera in 2020, it has revised its target for the 2022 Winter Olympic Games (the Panasonic S1H was likely envisioned as an 8K device, not the 6K one it ultimately became).

With news that neither Canon, Sony or Nikon will have their cameras ready until 2021, full-frame 8K is still some way away – though Micro Four Thirds 8K is almost here already thanks to Sharp…

In a historic moment for sports broadcasting, and a coming of age moment for camera phones, the NBA broadcast the first major sporting event ever to be shot entirely on smartphones.

The game was broadcast using 5G technology, with the infrastructure provided by America's AT&T network, and was filmed using an array of six Samsung camera phones – which appeared to be Samsung Galaxy S10 5Gs.

“The plan is to deliver fans a unique broadcast experience using the same cameras they use every day to capture special moments in their lives,” said Steve Hellmuth, EVP Media Operations and Technology, NBA Entertainment…

We’d guess there aren’t many people reading this who have never lost a lens cap, or never struggled to find one when they needed it.

Well, it looks like Canon might just have solved this problem. It’s early days yet, but the eagle-eyed folks at Canon Watch have spotted a patent application by the firm for a lens cap that might just be impossible to lose.

The patent number is 2019-113645, and it effectively works as a lens cap and a lens hood simultaneously, with its four sections opening and closing without the cap being removed from the lens…