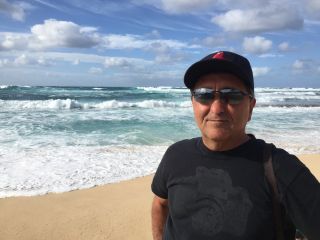 Pete Souza's job as White House photographer has allowed him to get unrivalled access to US presidents and world leaders. But he is best known for his images of the Barack Obama administration – showing moments of history and Obama's character in a fly-on-the-wall documentary style.

Souza is one of the star attractions at this year's Photography Show that runs from March 16-19 at the NEC, Birmingham, UK.

His talk on the Saturday of the show is now sold out, but we managed to get a chance to ask him five questions ahead of his appearance at the Show… about his award-winning career as a photojournalist, about how many pictures he shot of the Obama administration, and his early years photographing Ronald Reagan.

1. Is the primary role of the White House photographer to be a ﬂy on the wall?

So no matter who the photographer is and who the president is, every picture ends up going into what our country calls the National Archives. They document and archive these photographs in perpetuity.

For example, if you were to go right now to the Reagan Library website, you would see every single image I ever shot while I was in the Reagan White House. All the photographs from the Obama administration are already in the National Archives.

2. You had an extraordinary insight into both the Obama and Reagan presidencies. How did they differ in the way they reacted to you, and how they used photography?

It was a completely different era in the Reagan days back in the 1980s. I was a young man, and Reagan was in his 70s. I wasn’t the chief photographer, so I didn’t have as much access as I did with President Obama. With Reagan we shot all film, which presents its own issues, and with President Obama it was all digital.

The Obama administration made more present-day use of my photography than the Reagan administration did, just because of social media more than anything.

3. How many pictures did you take during the Obama presidency?

I shot almost two million photos. I guess a very small percentage of them were made public at the time, but there are probably 1.8 million that haven’t been made public yet.

4. Were there any historic moments that you missed?

No. I was actually there all of the time. I was off sick only one day in eight years and I didn’t take any vacation for the first five years. The last three years I took one week vacation each year.

I still went with Obama on vacation, too, because when you’re president something could happen when you’re on vacation. So I thought if I was going to take a vacation, it would be better to do it when he was on vacation too. That’s what I did for the last three years.

I didn’t really miss any big events, mostly because I was there. I made the decision early on that if I’m going to document for history, you can’t say when history is going to take place all the time. In those three weeks of vacation I missed probably a couple of interesting pictures, but they weren’t history-making pictures.

5. Who did you draw your inspiration from when you took on the job? Who were your heroes and mentors?

For this job at the White House it was Yoichi Okamoto, LBJ’s (Lyndon Baines Johnson, the 36th US president) photographer. He was really the first official White House photographer to document a presidency for history. President Kennedy had two military photographers rotating, but they didn’t have access to everything.

When LBJ took over after Kennedy was killed, he brought on board Yoichi Okamoto, and gave him total access. For me, he was the guy who had always set the bar so high in terms of the role of official White House photographer, so that was my goal: to at least get the same kind of access to President Obama.

They’re completely different people, LBJ and President Obama, and my pictures reflect that difference, but for access and the art of photography, Okamoto was the guy that I looked up to.

There are over 200 exhibitors and over 300 free talks and demonstrations at The Photography Show, and sister event The Video Show. Tickets for the main show are available now, and you can get 25% off advance, single-day, adult tickets using the code DCAMTPS19 if you book by 13 March.

Pete Souza's talk on the Super Stage on the Saturday of the show is now sold out, but there are lots of other Super Stage sessions....