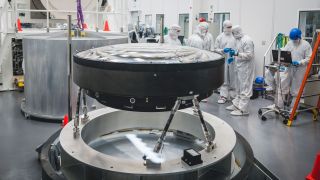 Pictures of what are claimed to be the largest-ever photographic lens have been released... and it sure is a whopper. The lens measures 1.57 meters, or 5.1 feet, in diameter and has been designed for use at the Large Synoptic Survey Telescope (LSST), which is currently being constructed in Chile, where it will be mounted in front a camera with a 3,200 megapixel sensor.

Called L-1, the lens is currently at SLAC, the Stanford Linear Accelerator Center, in California, which is assembling the super-resolution camera for the telescope. The lens is mounted with a smaller companion lens (1.2 meters / 3.9 feet in diameter) in a carbon fiber structure. Both lenses have been designed by the Lawrence Livermore National Laboratory (LLNL), and have been built over the past five years by Boulder, Colorado-based Ball Aerospace and Technologies Corp. and its subcontractor, Tucson-based Arizona Optical Systems.

The camera is budgeted to cost $168 million and is more than 90 percent complete; it is due to be finished by early 2021. A third and final lens is due to be delivered to SLAC in the next few weeks.

The 8.4-meter LSST telescope will take digital images of the entire visible southern sky every few nights. During a 10-year time frame, LSST is expected to detect about 20 billion galaxies — observing more galaxies than there are people on Earth – and will create a time-lapse movie of the sky.

This data is designed help researchers better understand dark matter and dark energy, which together make up 95 percent of the universe, but whose makeup remains unknown, as well as study the formation of galaxies, track potentially hazardous asteroids and observe exploding stars.

The telescope’s camera — the size of a small car and weighing more than three tons — will capture full-sky images at such high resolution that it would take 1,500 high-definition television screens to display just one picture.