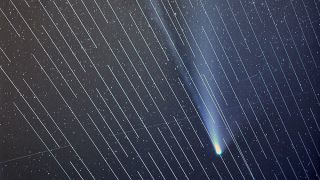 It may be a slice of the future today, but SpaceX has also proved to be a spoiler for at least one photographer trying to snap a once-in-a-lifetime shot of Comet Neowise.

As any astrophotographer will tell you, it is a niche yet incredibly rewarding genre within our favorite medium. As with all good things in life, you have to put the work in to get the best results – but the stunning images of the heavens that are possible with patience and practice keep many photographers coming back for more.

So, when a once-in-a-lifetime opportunity presents itself, it is no surprise that many jump at the chance to photograph a rare celestial object. Comet Neowise is incredible to behold, and some of the images we have seen are mesmerizing. However, the last thing you want to happen, especially after sacrificing your sleep and dragging yourself to a site which is free from light pollution, is to find your shots ruined by an unexpected source of frustration.

Unfortunately that is exactly what happened to Daniel López who, after setting out with the intention to record a telephoto timelapse of Neowise, discovered that the majority of his captured frames featured SpaceX’s Starlink satellites streaking across the comet.

The plan was to shoot multiple 30-second exposures with a Canon EOS Ra mirrorless astrophotography camera, which could then be stacked in software for superior detail. Around 20 of his frames were hijacked by the satellites, who's reflective surfaces caused them to appear as bright streaks - greatly noticeable against the darkness of space and compositionally destructive.

"The field isn’t too big — 200mm with a full frame — but it happened to be passing right over the comet.” says López.

The photo I published a couple of days ago shows that it is giving something to talk about. That image, as I already explained, was the sum of some 17 images of 30 seconds each, added so that, in the final image, all the traces appeared. Well this is the time-lapse video of that photo. You can clearly see how almost 25 of the 34 images I have used to make the video show traces.

"The field is not very large – 200mm with a full frame – but it so happened that they passed just above the comet," wrote López on Facebook. "That image… was the sum of some 17 images of 30 seconds each, added so that, in the final image, all the traces appeared. Well this is the time-lapse video of that photo. You can clearly see how almost 25 of the 34 images I have used to make the video show traces."

It was only earlier this year that SpaceX revealed plans to reduce the light pollution footprint of its Starlink fleet by adjusting the angle of their solar panels and installing sunshades on newer units.

In order to avoid falling foul of the same problem, you can track the Starlink satellites to ensure that you will have an unobstructed view while planning a night sky shoot of your own!

Digital Photographer magazine is the monthly kitbag essential for pro and enthusiast photographers. Be challenged and inspired to get the best results from your gear.