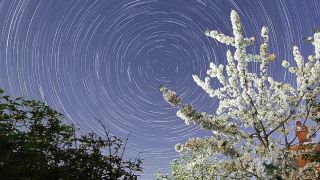 Is the lockdown helping to create the best night skies for years? The lack of air pollution from aircraft and cars, and a cut in light pollution from the latter’s headlights, has contributed to sparkling night skies in recent weeks. Europe has also been blessed with a lot of clear weather, which is equally as important – if not more so – for astrophotography.

Either way, there hasn’t been a better week for decades to get out into your back garden (or even just poke lens out a window) to capture some sparkling celestial events. And this week we have a series of five astrophotography projects for you to try…

Some of these projects you can try either next week, after lockdown, or every once in a while, but rarely can you do all them in the same week – and under pollution-free skies – and become a master of the basics of astrophotography … at home!

It all comes to a head this week as a New Moon on Thursday, 23 April brings the darkest night skies possible … just as a meteor shower peaks. With four visible planets and a super-slim crescent moon about to grace twilight, there are few better weeks this year – possibly ever – to have a go at astrophotography from home.

Over the next five days we will show you what to photograph, exactly when, and how, though as with all astrophotography in low-light, do experiment either side of these suggested settings – a lot will depend on your camera, your lens and the specific light levels when you open the shutter.

So turn lockdown to your advantage and start shooting amongst the stars without leaving home!

Making a star trail for spring

Let’s begin with some basic good practice; if you’re shooting from a city or anywhere with light pollution, dial-down the ISO, at least to begin with; ISO 800 is a good starting point because it will reveal stars without artificial light (pollution) creating too much image noise.

It’s perhaps the ultimate in mesmerizing night sky photography, but while creating your own ‘trail of stars’ image is time-consuming, it’s actually very easy. Simply put, you frame a nice, interesting, clean and star-filled long exposure shot, tweak it until you’re happy with the composition and your settings, then fire-off the same shot for at least an hour.

Then you stack them all quickly and easily using the free software StarStaX to produce one image. The science is that stars in the northern sky are circumpolar; they appear to move around Polaris – the North Star – because that’s the star Earth’s tilted axis points at.

Here’s how you see circles of stars:

Normally, you need to manually remove several frames that are stained with the taillights of aircraft, which produces unwanted gaps in your star-trails. However, that’s not the case at the moment, so go for it!